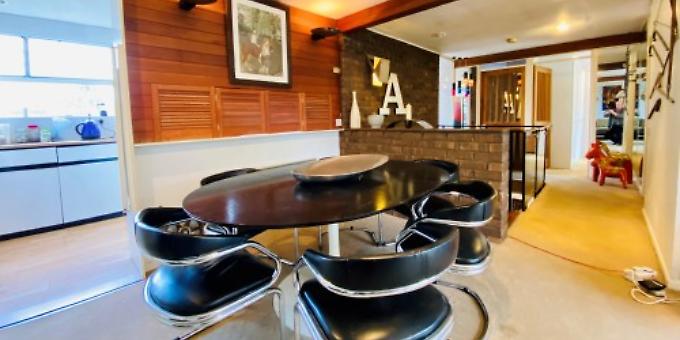 A SIX-bedroom family home inspired by a classic of 20th century design is on the market in Catslip, near Nettlebed.

Built in 1964 by the architect Jack Bonnington, this was among the first examples of a steel-framed house in England and was later included in the Twentieth Century Society’s compilation of the best 100 houses of the era.

The second of five children of Malcolm and Anno Cheesman, Nathan Cheesman grew up at Solar House, which was constructed in stages between 1969 and 1970.

He says: “What happened was, when I was quite young — I think four-and-a-half — my parents bought the plot of land because they always wanted to build their own house, which nowadays is quite a common thing with Grand Designs and all those sort of television programmes.

“Back then there weren’t many people who were really keen to go and find a piece of land and have a house designed by an architect and then build it.

“We lived in a caravan on site for the best part of 18 months to two years on site while the steel frame went up and then bits and pieces of brickwork were done. Then my father did a little bit of the work himself.

“So my parents basically had the house built and it’s been in the family ever since, so it’s quite a strange thing to finally be selling it.”

Solar House is on the market with Henley estate agent Tim Peers with a guide price of
£1 million.

Among the design features characteristic of the period are glass block, timber-panelled and exposed brick walls, full-height picture windows, a vintage fire drum fireplace and a timber open tread staircase.

The entrance to the house is under an overhanging upper storey and leads into a spacious tiled hallway. On the ground floor are three double bedrooms, a family or club room that can also be used as a bedroom, and a cloakroom and shower room.

Upstairs are two more double bedrooms, a large family bathroom and a kitchen-breakfast room. There is also a separate dining area off the main landing and a double aspect living room.

“It’s kind of an upside-down house,” says Nathan. “If you can imagine a rectangle on top of a square, that’s sort of our house.

“Upstairs, it’s basically all upstairs living. When my parents were thinking about the house they were thinking how it annoyed them that in most houses you only go upstairs to basically go to bed.

“They wanted to live in the house and obviously upstairs with the glass windows, that’s where you get your views, so it seemed bonkers to be living downstairs all the time.”

Nathan’s father Malcolm ran his own furniture business and was responsible for furnishing the house.

“He was in furniture but his father was an engineer,” says Nathan.

“So consequently he never had any problems at all turning his hands to making things. He was always very comfortable working with his hands.

“The house is very Seventies. It’s a time warp, if you like, and he furnished it of the period. Now it’s very retro.

Tim Peers, who calls Solar House “a Modernist freeze frame” is marketing the property as either a new build or a refurbishment opportunity.

The property has never previously been on the market, but having grown up there, Nathan is hoping for a buyer who might choose the latter option.

“It needs a lot of work done to it,” he says. “I mean, the chances are I think somebody is going to buy it and knock it down and start again with the plot of land.

“But the house was my parents’ dream and I would love to think it could be somebody else’s dream.”

For the architecturally minded, the link with Ferrum House is a big part of Solar House’s appeal.

“Without question if you look at the two houses you can see that they are kind of brother and sister,” says Nathan.

“Definitely a lot of inspiration is taken from that property.”

In recent times films such as High-Rise (2015), starring Tom Hiddleston and based on the 1975 novel by JG Ballard, have helped bring the Seventies aesthetic back into vogue.

Nathan says that were he looking to refurbish Solar House himself and “bring it up to spec” the flat roof would be the best place to start. “You could put a slight sort of pitch on it. And I would say that once that is sorted then everything else would sort of drop into place.

“Some of the windows are not double-glazed because obviously the whole thing was built when it was built, as it were.

“You’d probably now change the windows to those wonderful windows where you can look out but other people can’t look in.

“It has got the woods opposite, so there’s no one around but it is very much a steel and glass house.”

For Nathan, one of the property’s main selling points is its quiet location.

Sitting in a plot of around a third of an acre, the house itself is not overlooked.

He says: “Because it’s at the end of the road, any other properties are sort of to the left as you look at it. It’s just woods to the front and woods to the side. The whole place definitely lent itself to us as a family. Growing up, the number of times we had people over, it just sort of swallowed people.

“But it’s just a great place to have a family because growing up it was just so safe, with the walks nearby and having animals there — that was really lovely. A bit like going back in time, maybe.

“It is like a time warp, almost. You can just go and walk for miles and we were just the sort of kids that literally jumped on our bikes, disappeared off and didn’t come back until the evening or when we got hungry. And yet you can still do that there.

“What I mean is that it hasn’t all been built up there and everything. And that, I think, for a family home, would be a massive appeal.”

A THATCHED cottage that dates back to the reign of Henry VIII is on the market in Whitchurch Hill. ... [more]

A DETACHED, double-fronted three-bedroom cottage in Fair Mile, Henley, is on the market with Davis ... [more]

RECOVERY is on the way, according to a survey of the commercial property sector by the Royal ... [more]