Sixties house has been completely remodelled 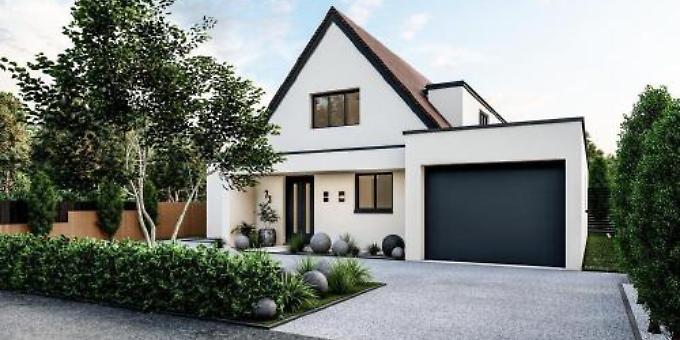 A FOUR-BEDROOM detached house in Blandy Road, Henley, that has been completely remodelled and refurbished is on the market.

Having previously worked in banking in London, Cristie moved to Henley four years ago and now lives in Rupert Close, near Phyllis Court Club.

She says: “This was actually the first property I did through Dragon Developments, so it’s the flagship, which I’m really excited about. All the other properties I’ve developed in the past have been properties that I’ve lived in.”

The name Dragon Developments derives from Cristie’s birth year of 1976, which was the Chinese year of the dragon.

She says: “I’m Australian, but I’ve been in the UK for 23 years now, so I’ve actually lived here longer than I lived in Australia. I can’t believe I haven’t managed to shake the accent yet, though.

“I’m originally from Sydney, so I think that’s why I’ve always had a soft spot for properties with nice big gardens because I’ve grown up with that.

“Australians love a barbecue and a good garden space, so I think that’s why I’ve always been drawn towards those types of properties.”

Having acquired 73 Blandy Road in February, Cristie set about getting planning permission for the changes she wanted to make. She says: “We had to be sympathetic to the architecture in the area as the planners were concerned about the street scene, so while we kept the overall shape of the house we adapted the façade quite dramatically to give it a really modern look and feel.

“At the same time we’ve managed to nearly double the square footage of the property.

“The reason I bought it is because it’s such a good-sized plot and there was just so much potential.

“It’s really quiet, too — it’s backing on to the fields, so you’ve got all these really mature trees at the back, which is just beautiful.

“I’ve added a little pedestrian gate in the back too in case the future owners would like easy access to go out and walk their dogs.

“We have two dogs at home ourselves, so I’ve installed a warm water tap on the side of the house so that they can wash their dogs or if they have a small family can fill a paddling pool.

“I basically developed the house exactly the way I would want to live in it.

“For example, there’s underfloor heating across the ground floor and in the bathrooms upstairs.

“The kitchen is actually the same kitchen I have in my own house. I used a company called Olive & Barr and they’re just amazing because you can tailor it to suit your needs.

“This kitchen is actually better than mine at home as I had the opportunity to improve on the one I’ve lived with for two years. It’s all very high quality and finished off with Italian marble countertops.”

The centrepiece of the hand-built kitchen is a large island with a breakfast bar that looks out on to the back garden through a large set of sliding glass doors that open on to a patio that extends to the full width of the property.

Cristie says: “I was toying with putting in bifold doors but I went for the slimline patio doors instead because I think that being able to have an unrestricted view of the garden has much more of an impact.

“It can be opened to over four metres too, which complements that feeling of bringing the outside in during the summer. I was undecided for quite some time but I feel it was the right decision.

“I ended up creating a patio across the entire width of the house rather than just outside the patio doors, which is 13 metres in total, so it’s a really decent size for any gathering.

Back indoors, the kitchen occupies one end of an open-plan living space, with plenty of room for a dining table and chairs and a living room-style seating area that has a cast iron wood-burning stove with a slate hearth in the corner.

Above, a glass and aluminium roof lantern floods the space with natural light.

The kitchen benefits from a walk-in pantry, next to which is a separate utility room.

At the front of the property is a garage with an electric door and side door access. The in-and-out driveway has off-road parking for several cars.

Just off the broad entrance hall is a reception room/snug with views to the front.

This would be ideal as either a library, hobby room, playroom or separate sitting room. Across the hallway is a downstairs WC and around the corner is a study with glass doors and a second roof lantern.

The width of the hallway means there is potentially space for two separate offices to be set up in this area, but Cristie says that if more space is needed for working from home it would be possible to use one of the bedrooms or even install a garden office.

She says: “If someone wanted to put an additional office space in the garden, there’s definitely room for that too — it’s huge.”

The ground floor is also home to one of the property’s four double bedrooms.

Like the principal bedroom upstairs, it has an en suite bathroom. This is fitted with floor-to-ceiling Italian porcelain tiles, a WC, wash hand basin, heated towel rail and a walk-in shower.

For Cristie, the downstairs bedroom offers multiple potential uses, whether as accommodation for guests, a live-in nanny, an older family member or even a teenager.

It is a feature that she has come to appreciate from her own recent experience.

She says: “We have a bedroom downstairs at our house and my first thought was ‘that’s a bit strange’. But I would always include a downstairs bedroom in my plans going forward as it works so well for multi-generational families, guests or a live-in nanny.

“Some people may not realise the value as much as I do if they haven’t lived with it before but it definitely helps having a bedroom downstairs.”

Upstairs, the principal bedroom suite at the rear of the property has a large window overlooking the garden and hand-painted wall-to-wall wardrobes.

The en suite bathroom is tiled in Italian porcelain in a marble style and features a double vanity, a double walk-in shower with recessed drain, a wall-mounted WC and a heated towel rail.

At the other end of the landing, the family bathroom features a large free-standing oval Jacuzzi bath together with a large shower, a wash hand basin, a WC and a heated towel rail.

With the original house on the site having been built in 1966, the transformation wrought by Cristie and her team has been comprehensive.

She says: “The long and short of it is that there were probably only about two walls left of the whole house, so there was not a lot of the original shell left by the time I had finished with it.

“It hadn’t been touched since the Sixties, so it needed rewiring and replumbing — and with hindsight I probably should have demolished it an started again.”