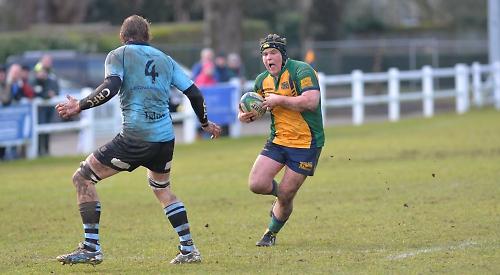 THE director of rugby for the Henley Hawks says he believes a top-six finish is still possible for the team.

Nigel Dudding insists the Hawks, who were second-bottom of National League 2 South just weeks ago, can mount a charge during the second half of the season to rescue a disappointing campaign so far.

Henley moved up to 11th thanks to a draw at high-flying Chinnor on Saturday and Dudding says the target is to go unbeaten in the second half of the season.

He said: “We said on Saturday that we can beat anybody in this league. Seven of the top sides we still have to play at home and we also finish with two home games.

“We’ve set the target of going unbeaten for the rest of the season which I think is realistic.

“I still believe we can end up in the top six. It will take a lot of hard work to get there but that’s the target.

“Given where we were a few weeks ago it would be a remarkable achievement.”

Dudding says the league, which the Hawks won in 2015, is more competitive than it has been in previous years, while the team has had problems with squad depth, with several players missing games due to injury this year.

He said: “We’ve been competitive in so many games but we’ve just been missing out. There have been seven or eight games where we’ve lost by a 10-point margin and not got any credit for that.

“There are some well-endowed clubs in the league, Chinnor being one of those, who have been able to get players from Championship sides.

“The playing budget is crucial but we want to produce a sustainable model at whatever level we play at.

“We’ve had massive issues with injury, particularly in the front row, which has left our scrum vulnerable. Other people have stepped up and done a remarkable job and we are hoping to get players back to strength in the New Year.”

Among those to return in 2017 will be RAF corporal Dave Manning, who has been serving in Afghanistan, and fellow prop Brad Cook who will be making a comeback after injury.

Dudding says that the side have also struggled from a lack of power in the scrum and have been let down by the technical side of the game after devoting a lot of the pre-season to improving fitness.

He said: “It’s hard when you’ve been on the receiving end of some difficult games.

“You can be the fittest side but it doesn’t matter if you are under pressure up front and the technical parts of the game are left wanting.

“That’s been a significant factor — the scrum has been underpowered but we are improving week on week.

“There are several players coming back from long term injuries which have left the squad underpowered at times.”

Dudding insists he is happy with the performance of coach Pete Davies and expects the side to kick on in the New Year. He said: “We’ve had some difficult times, particularly in the build-up to Christmas when we were second-bottom of the league.

“We’ve moved a few points clear now so we want to build on that and move forward.” Dudding says the display against Chinnor, where the Hawks only missed out on the win thanks to a last-gasp try from the home side, shows they can still compete with the best teams.

He said: “A lot of people thought it would be a one-way game and they were going to take us apart but it became apparent that we were in a really competitive match.

“We outscored them in terms of tries but couldn’t hold on at the end, which has been the story of our season.

“There was the initial disappointment but we got three points and before the game we would have taken that given our recent struggles.

“We didn’t hold on to the whole five points but it set up the standards we need for the second half of the season.”

Dudding added that the club as a whole is in rude health, with the new £475,000 clubhouse attracting visitors and more improvement planned for the changing rooms and other facilities including a club shop.

The club’s second side, the Bulls, are currently fifth in the Zoo Sports Division 1 and the third team, the Vikings, are looking to win the South West Division 2 title.

Dudding said: “The Vikings are second in their league to Newbury and have a home game against them to come so we hope they can win the league.

“The Bulls have probably had one of their most successful years in a long time with some remarkable results, especially considering the first team in struggling.

“It’s a real credit to the players and coaching team that they can produce that level of performance.

“The women’s team has also done remarkably well, they’ve had a lot of injuries but are starting to hold their own.

“They are looking to progress in the cup and do well in the league and are a tremendous credit to the club so we are delighted.

“The Bears and veterans’ team, the Vultures, have also had a few games and have done very well.”

Dudding said the success of the second and third teams is a reason for optimism. He said: “We are only as strong as our depth of squad and a number of guys have come up from some good performances for the Bulls to play for the first team.

“That paves the way for progression and it’s vital that the second team is competitive.

“We want the Bulls to finish their season as strongly as possible and are looking at promotion for the Vikings.

“Community-wise a lot is going on at the club, the atmosphere is great at the moment and we want to build on that.”