Making memories is where it’s at for global adventurer 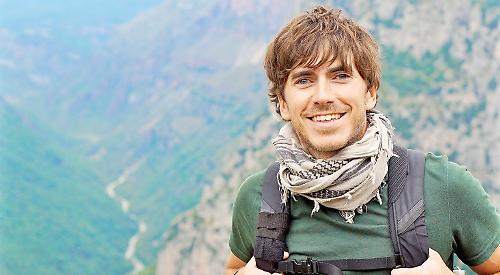 HE’S one of the most adventurous journalists on the planet whose televised exploits have seen him dodge bullets on frontlines, track lions and tigers on foot, and be detained for spying by the KGB.

Simon Reeve’s acclaimed series of BBC programmes and documentaries are a global phenomenon, having been shown in more than 60 countries around the world — around half the number he has so far travelled to in the course of making them.

The 46-year-old has been hailed as “the craziest (or bravest) man on TV”. But now he is taking on a whole new challenge in the form of his first ever theatre tour.

“An Audience with Simon Reeve” will take the adventurer to the Wycombe Swan on Monday, November 19, with a show that features exclusive footage from his 15-year television career and a 20-minute audience Q&A.

Fascinating and educational, the show is by turns shocking, inspirational and hilarious. But what inspired Simon to step out from in front of the camera and engage with audiences in person?

“I’ve had some magnificent adventures and met some of the most inspiring people on the planet,” he says. “So obviously I’ve got lots of tales from my travels and this is a tremendous opportunity to share them.

“There’s a lot that I see and film that never makes it into the programmes, so there’s also behind-the-scenes stories to tell and footage to show. I also like doing things that are a bit challenging and nerve-racking — and performing a live show is certainly a challenge that should get the ticker going! I like that adrenaline rush.”

There are 195 countries in the world. Having travelled so widely, what lessons has Simon drawn?

“The world can seem a scary place but it really isn’t,” he says. “This is the golden age for travel — these days, ordinary people can have adventures that in the past only kings and queens could have dreamt of.

“You can go anywhere now. But people are sometimes reluctant to leave their holiday resort. They are told that they should simply go to a resort and sit by the swimming pool being milked for cash while being served drinks in primary colours. I’m urging people to go beyond the confines of the resort. That’s where you get the best memories.”

Like many people who became successful in later life, Simon admits he “didn’t get on with school”, adding: “Everyone seems to think that to be on TV you need to have got straight As at public school, but I don’t come from a media family or a wealthy travelling background and I left my local comprehensive school with basically nothing and went on the dole. I never went to university. Don’t tell anyone!”

He’s able to make light of his situation looking back, but as an unemployed teenager with limited prospects, how did he start to turn things around?

“I got a job as a post boy on the Sunday Times and my world began to open up. I owe my career to Andrew Neil — I’m sure you’ve rarely heard that sentence before!

“I was very lucky. His idea was to give the post boys an opportunity to have a crack at working on the paper. Everyone else on the paper was Oxbridge and I was very London. I was pretty unusual, but I was keen and eager and they gave me a chance.”

How did his career progress from there? “I was this pathetic kid suddenly thrown into an environment where people were doing very exciting things and working on serious investigations. I carved out my own niche — and that was the making of me.

“First I became an expert in fixing these vital big photocopying machines they had, so they couldn’t sack me. Then I fell into investigating terrorism, as you do. I started researching the first attack on the World Trade Center in 1993, and eventually wrote the first book on al-Qaeda, which came out in 1998. Nobody read it. Then I wrote some other books and worked on hardcore investigations where I spent time undercover.”

Then the September 11 attacks happened, and it wasn’t long before the television people came calling for Simon. “Suddenly I was chucked into the world of TV,” he recalls. “I’d written the only book in the world about the biggest story of the time. I also knew people who died as the towers came down — I’d met them when I was researching my first book. I had my own hair and teeth and, TV being a shallow medium, producers were soon knocking on my door. I owe my entire career to my hair!”

He’s joking — but the TV people weren’t. “The BBC wanted me to make a series for them. The first ideas were a bit daft — they included wanting me to infiltrate al-Qaeda. I didn’t think that was a very good idea. In the end we settled on the idea of going on adventures in parts of the world that weren’t often on the TV, and into which we would try and work light and shade, both adventure and issues.

“The first BBC series I did in 2003 was called Holidays in the Danger Zone: Meet the Stans, and it was all about my journeys in the Stan countries to the north of Afghanistan, including Tajikistan and Kazakhstan. I loved it from the first day of filming. It was very well received, which was a surprise to me as the presenter. So the BBC had me back, and since then I’ve made more than 100 programmes around the world.”

Is there anywhere he wouldn’t travel to? “I don’t think so. You can go almost anywhere. I’ve had extreme experiences that are unfiltered, upsetting and raw. But I don’t think we need to shy away from them. We just have to approach them carefully and sensibly. You need to go in with your eyes open and keep your wits about you. It really is a very safe world, as long as you take some basic precautions. We have to get things in perspective. Remember we live in a country where thousands of people are hospitalised each year just putting on their trousers! You can travel almost anywhere, as long as you wear a seatbelt and avoid hotel salad buffets!”