Iconic comedy takes a closer look at what the butler saw 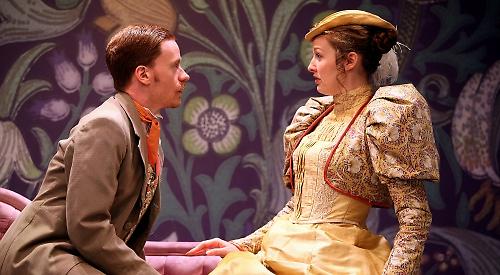 The Importance of Being Earnest | The Watermill, Bagnor | Monday, May 27

OSCAR Wilde’s The Importance of Being Earnest has long been recognised as one of the world’s iconic comedies — a sparkling and witty satirical observation of marriage and the social mores of Victorian society.

To mount any present-day production of such a traditional favourite is a huge task given all the well-known and loved performances of the past.

But if you imagine Wilde approaching the Watermill Theatre and saying “Create a production that makes my play even funnier and relevant to modern-day audiences” then its current production more than fulfils that brief.

For instance, who could imagine the walk-on part of the butler being transformed to make him one of the leading characters?

Morgan Philpott’s deadpan performance is a real highlight as he deftly changes improbable props, cues sound and light with a remote control, and magically transfers the action from outdoors to indoors by summoning a handy window frame to drop in from the heavens.

None of Wilde’s glittering prose has been lost, but is rather enhanced by wonderful performances from a seasoned and very able cast under superb and innovative direction by Kate Budgen.

Every part was perfectly cast, with Peter Bray as Algernon and Benedict Salter as Jack expertly making the absolute most of every nuance of Wilde’s text.

And Connie Walker had the unenviable task of bringing a fresh approach to the part of Lady Bracknell, which she achieved with a light and almost innocent touch.

But perhaps the biggest surprise was “sweet little Cecily”. In Charlotte Beaumont’s (and director Kate Budgen’s) more than capable hands she became a feisty and coquettish sheer delight that was the icing on the cake of a wonderful, quirky and extremely funny production.

The simple yet very effective set from designer Amy Jane Cook, sound by Jon McLeod and fabulous traditional costumes all enhanced a superb evening, of which no doubt Oscar Wilde himself would have been proud.

The Importance of Being Earnest is playing at The Watermill Theatre, Bagnor, until Saturday, June 29.