Eavesdropping play all about the UK is well worth a hearing 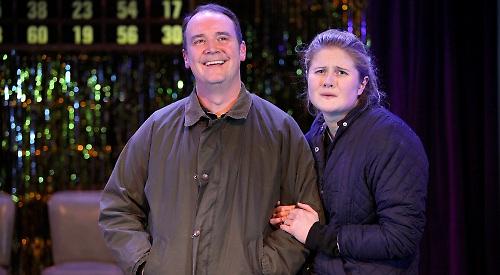 JOURNALIST Craig Taylor was surely inspired by the richness of the human condition when he decided to write One Million Tiny Plays About Britain — a collection of nearly 100 vignettes about Britishness and life in Britain gleaned from conversations overheard first in Canada and later in London.

First published in The Guardian’s Weekend magazine, and later as a book, a complementary selection of about 30 of the plays has been drawn together by director Laura Keefe and is now making a most welcome return to the Watermill Theatre at Bagnor after its first airing four years ago.

It is a breathtakingly well performed and wonderfully entertaining show. The snapshots of other people’s lives give a wonderful insight into 21st century life as it is lived across every spectrum of society, reflecting complicated relationships that are sometimes hilariously funny, sometimes poignant and sometimes unashamedly sad.

The vehicle is a game of bingo, and as each number is called out we instantly drop in on another conversation.

And obviously the quick-fire nature of the production calls for brilliant acting skills and lightning costume changes the likes of which you will never have seen before.

Cue the fabulously talented Emma Barclay and Alec Nicholls, who give a masterclass in their art that will leave you breathless.

They transform themselves into small children, irritating brats, domineering middle-class matrons, vulnerable teenagers and even more vulnerable octogenarians seamlessly and with complete conviction. Just the costume changes alone were most impressive, and at times very funny indeed as they peeled off layer after layer to accommodate the next character they were portraying.

Wigs, props, furniture, lights and buckets were all there on the stage, and they used them to magnificent effect.

After the interval we all joined in an impromptu game of bingo, which was a new departure for many of us, and a good time was had by all before we were led off again to eavesdrop into other people’s lives.

This production is a tour de force that offers magnificent entertainment value and is a must-see for that alone. But seeing it will also subtly affect the way you move among your fellow men and women in future and help you realise that there is entertainment all around you, if you only listen out for it.

One Million Tiny Plays About Britain is at the Watermill Theatre until Saturday, February 15. For tickets, call the box office on 01635 46044 or visit www.watermill.org.uk