Dickens by the books is where ingenuity and versatility meet 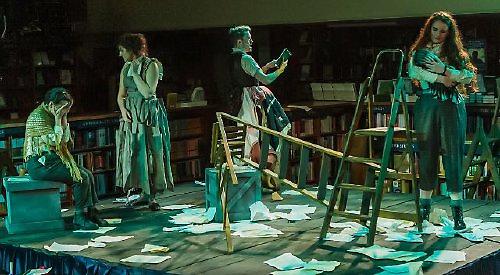 WHERE better to stage a dramatisation of one of the greatest Victorian novels than in a great bookshop?

Blackwell’s in Oxford is the venue for Creation Theatre’s new version of Bleak House by Charles Dickens, performed by a troupe of three women and two men.

Yes, that’s right, five actors to encompass a 900-page book containing countless characters, and multiple plots and sub-plots. To make things even trickier the writer-adapter Olivia Mace has added a medley of music and songs to the unfolding drama.

Each player takes on up to half a dozen parts, switching hats, coats, gender and accents. Though a glancing knowledge of the book helps, the action and characterisation stay clear throughout.

The scene shifts from the Chancery Court in London, where the interminable Jarndyce case has dominated and ruined so many lives, to the Dedlocks’ grand estate in Lincolnshire to the Bleak House of the title. On the way we visit junk shops, lawyers’ offices, slums and cemeteries.

Stepladders and packing-cases furnish the stage. The London fog is suggested by sheets of paper scattered through the air, sheets which then become the paper which fuels the law courts. Open books waved in the air double as the flapping wings of birds.

The ingenuity of the staging is matched by the versatility of the players. Joanna Holden ranges from the remote Lady Dedlock, who has a scandalous secret to keep, to the crazed Miss Flite. Newcomer Sophie Jacob plays Esther, the moral centre of the story, as well as a clutch of lesser characters, while Eleanor House does a nice turn as the hapless Mr Guppy and a murderously comic French maid.

Morgan Philpott is an authority figure, imposing or warm depending on his role, and Bart Lambert travels the spectrum from an illiterate street-sweeper to the do-gooding Mrs Pardiggle — cue for a faintly Gilbert & Sullivan-style number — to a lawyer determined to uncover Lady Dedlock’s mysterious secret.

Bleak House is in part a mystery story. It’s about England as it was in the early Victorian period but, as writer Olivia Mace points out in the programme, it’s also about our world now, with its inequalities of wealth, social status and gender.

Under the direction of Deborah Newbold, this show is true to Charles Dickens’s vision but it fleshes out the mammoth bones of his tale with colour, wit and style.