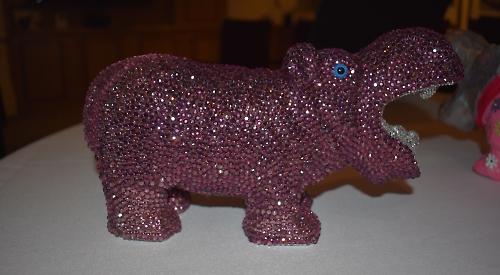 A COMMUNITY art project has been launched to celebrate the bicentenary of Leander Club in Henley.

Two-hundred papier-mâché hippos — the club’s symbol — will be given to schools, community groups and artists to decorate for Hip Hip Hooray.

Measuring 18cm by 28cm, each hipppo can be painted, papered, embellished, dressed or decorated in some other way. They will then be put on display in shops, businesses and homes in the town in May and June as a trail for visitors to follow before being returned to Leander on July 22 for the club’s family day.

After the project some will be returned to their creators and others auctioned for charity.

The project was launched at the club by general manager Paul Budd, house manager Caroline Mulcahy and Shelley Robertson, of Wilson Avenue, Henley, who came up with the idea.

Mr Budd said: “It’s a very exciting project. Everyone I have spoken to about it has picked up the enthusiasm. The hippo — the king of the river — has been part of our regalia since the 1850s and part of what we want to do for the bicentenary is reach out into the local community.”

The hippos will also be used for this year’s regatta window display competition with each participating business being given one to display.