‘Our royals explain why we are weirdly romantic’ 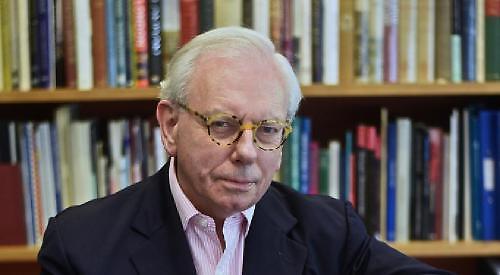 IT was the wedding of the year by a country mile and — amidst a sea of Brexit uncertainty — the sort of occasion that arguably shows Britain at its best.

The wedding of Prince Harry and Meghan Markle in May last year was both a media feeding frenzy and something of a public relations coup for UK Plc.

By marrying a divorced American actress of mixed race and uncertain religion, the second son of the Prince of Wales was widely seen as signalling a fundamental modernisation of the British monarchy. But was he?

One man with an intriguing answer to this question is the constitutional historian Professor David Starkey, who is returning to the Kenton Theatre at 7.30pm on Friday, April 12, to give a talk titled “A Monarchy of Misfits?”

“As the Queen recognises with the way in which she’s so quickly integrated Meghan and promoted her, promoted Harry, within the institution she most values, the Commonwealth, Meghan is a very good news story,” he says.

“The oddity of her outsider status combined with this poise, this elegance, this ability to speak well in public, the fact that dear Harry desperately needed a good woman to take charge of him — it all works astonishingly well.”

Set against the long sweep of history, however, there is an argument to be made that Meghan is not quite as groundbreaking a figure as she at first appears.

“The whole point of my lecture is to argue that although Meghan looks very extraordinary in terms of the 20th century monarchy and its immediate predecessors, there are lots of people just as odd as she is in the Middle Ages.”

In the publicity material for his talk, Starkey notes that Meghan’s marriage to Harry can be seen as a return to the 14th century.

“I point out that the Black Prince, one of the most famous figures in English history, the eldest son of Edward III, marries a woman who is twice divorced, widowed, with children, and who had eloped with her first husband at the age of 12. How’s that for starters?

“One of the other sons of Edward III married the au pair. That was John of Gaunt, from whom the Queen directly descends. And another one of them marries a part-Moorish Spanish princess who it is claimed was a direct descendant of the Prophet Muhammad.”

None of which is intended to detract from the royal family’s prestige. At one point, alluding to the political turmoil over Brexit, Starkey says: “The monarchy is about the only bit of our constitution that’s still looking reasonably respectable — it’s extraordinary.”

For Starkey, who made a series on the subject for Channel 4 that eventually ran to 17 episodes, the story of the British monarchy is one that is distinguished by several very different chapters.

“The idea of these marriages that I was talking about with Edward III, the thing they all have in common is they’re marriages for love.

“Again, with Edward IV, Henry VIII, these are love marriages. And you then get a very, very sharp change when you get the foreign royal houses coming in, when you get the Stuarts, who feel they have to marry into a very high level of European royalty, which creates the most terrible problems because all their wives are Catholic when they’re supposed to be Protestant.

“And then again, more particularly with the House of Hanover, from whom the Queen descends, where you have the most restrictive marriage rules. And partly because they have to marry Protestants — that’s the English rule after the fall of the House of Stuart in 1688-9 — but also because of German rules, they’ve got to marry German princesses of the right status. And the problem with that is that when any one royal prince wants to marry it turns out there are only about two and a half women in Europe that he can marry — and they’re both unbelievably unattractive.

“I mean, for much of the 18th century, English royal princes opt out of marriage — they just have long-term love affairs with actresses instead.

“And again, the story has a very sharp turn in it in 1917 when you really reinvent the monarch, when you invent the House of Windsor — and the House of Windsor is designed to replace a German dynasty. Remember, the royal family in the 18th and 19th centuries keep on becoming foreign again because they marry back home with each generation.

“But with 1917 you turn a German dynasty into an English family. You call it the House of Windsor and then you also adopt English marriage customs.

“Before then, for centuries, princes and princesses had got married privately. The whole way we think of a royal marriage in so many ways is a very modern, very recent invention.

“The thing people love about the lecture is when I explain that we English are very peculiar because we think love and marriage have got something to do with each other. Tell that to a Frenchman and he laughs his head off.”

Like so much else in our national life, according to Starkey, this cultural thread leads back to Henry VIII and his six wives.

“That extraordinary cycle of marriages, in which the idea of love plays an absolutely central part — it’s magical, it’s captivating stuff. With each one of them, with the exception of Anne of Cleves, Henry is deeply in love.

“The love may turn to something else very quickly, but there is no doubt whatever, we know — we have it from his own lips — that this is the reason for what he does.

“It’s a unique pattern. Other monarchs, of course, fall in love — but they fall in love with mistresses. The peculiarity about Henry is that he insists on marrying his mistresses.”

And Starkey thinks this quirk of Henry’s has fed through into our cultural practices today?

“Very much so. We are a weirdly romantic people.”

So Henry wasn’t just desperately trying to father a son and heir?

“No! It’s love. If you look at the literary origins of all this stuff, clearly the idea of courtly love is French. It begins in France. But in France it’s never associated with marriage. It’s the English, from Chaucer onwards, who start to put the idea of love and marriage together. It’s a very Anglo-Saxon idea.”