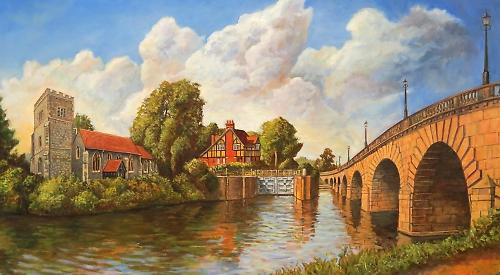 AN art teacher has presented Theresa May with a painting of a river scene as a surprise birthday gift.

Richard Ennis decided to depict a panorama showing three iconic landmarks in the Prime Minister’s parliamentary constituency of Maidenhead, each at a different time of day.

The painting shows St Andrew’s Church in Sonning in the morning light, Bray Lock at midday and Maidenhead road bridge at sunset as well as views of the Thames towpath.

It also includes the shape of Mrs May’s constituency hidden in the clouds and water.

Mr Ennis, who has taught art at Reading Blue Coat School in Sonning for 25 years, presented the painting to the PM at a private function at the House of Commons earlier this month.

Mrs May, who lives in Sonning with her husband Philip, said the painting was “wonderful”.

Mr Ennis, 57, said: “Being at the handover was something I’ll never forget. I watched the Prime Minister looking at it for the first time and I thought, ‘this painting is going to have some history with it’.”

He was chosen to paint the picture by Emma Hobbs, Conservative councillor for Charvil on Wokingham Borough Council, and Geoff Hill, chairman of the Maidenhead Conservative Association.

They were contemplating what to give Mrs May, who was then Home Secretary, for her 60th birthday on October 1.

They decided to commission a local artist to produce a painting on behalf of the association that had something to do with the constituency.

Peter van Went, the archivist at the independent school and a long-time supporter of the Conservative Party, suggested Mr Ennis, who was shortlisted for his portrait of the Queen in her diamond jubilee portrait competition in 2012 and had his work exhibited at the Olympic Stadium in London.

The landscape took him three months to complete, which included carrying out research, taking photographs, planning and about five weeks of actual painting. Mr Ennis said: “It was a huge privilege to be able to do this painting and very exciting to be given this challenge of creativity.

“My idea was to use the River Thames as a link to a panorama of three iconic landmarks in the Maidenhead constituency as well as a section of the towpath as I know Mrs May likes to walk along it when she can.”

Mr Ennis, who was paid £1,500 to produce the painting, said Mrs May was “nice” at the presentation.

“I didn’t get a chance to talk to her very much because there were so many people there,” he said.

“When she was given the painting it was a bit difficult to have a conversation about it but she immediately recognised the church and the various different bits. I spoke to Emma afterwards and she told me that Theresa was delighted with it.”

He said: “His talent is well known at the school and much appreciated and it is a privilege for our pupils to be taught by someone who is earning national acclaim for his work.

“As headmaster, I just hope (selfishly) that Mr Ennis does not receive too many lucrative commissions or he might decide to leave his day job.

“We congratulate him on this remarkable accomplishment and will endeavour to keep him happy here in the meantime.”