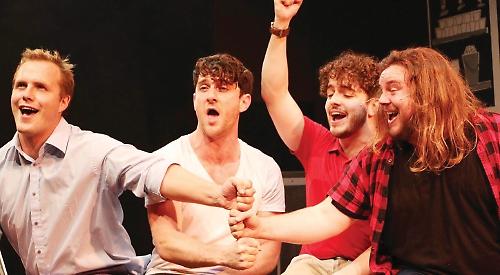 Bromance: The Dudesical | The Other Palace | Saturday, October 20

THIS show accurately represents the trials and tribulations of friendship and the beauty of finding your true best friends.

The opening scene was full of life and the actors’ energy was contagious. The four main characters — Joshua Gannon as Marty, Robbie Smith as Dick, Cellen Jones as Tom, and Richard Hunt as Harry — never failed to create roars of laughter among the audience.

Each one of them was remarkably talented and brought their own unique qualities to the show.

Straight away the typical boy behaviour was the driving force behind the comedy. The excessive beer drinking, road trips, nights out and cinema outings to watch Point Break had the audience in fits of laughter.

The females sitting in the audience will definitely have left the show with a better understanding of “Brotocol” and the way in which male friendships are formed.

All of the female parts were brilliantly played by one single actress, Esme Laudat. Her transitions between the various characters were elegantly executed and each character she depicted was clearly distinguishable from her previous role.

Her acting and ability to play so many different characters in one night was absolutely incredible. The female actress carries the whole play, showing the power and strength of women today.

The show provided heaps of amusement, outstanding acting, with stunning music and vocals.

Every aspect, from the setting to its actors and musicians, was brilliantly put together by everyone on the production team.