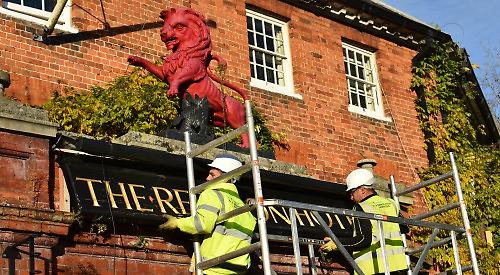 PERMISSION for new signage at the former Red Lion Hotel in Henley is being sought by the new owner.

The hotel is due to re-open in August in time for the Henley Royal Regatta as the Relais Henley. Relais is French for “coaching inn”.

The signs would be located at the front entrance and on the carriageway entrance to the Red Lion Stables.

They would have a dark blue background and gold lettering and be illuminated at night.

There would also be a hanging sign fixed to the south entrance on Thames Side and two wall-mounted menu and event boards. The old Red Lion signs were removed without permission in November last year.

Ms Leo, who bought the site from MG Hotels, said these would not be discarded and could be donated to the River & Rowing Museum.

A planning statement by Translation Architecture accompanying the application says: “The existing signs were seriously dilapidated due to long-term neglect. They were removed due to public safety concerns and have been kept safe on the property pending the outcome of this application.

“The hotel owners are mindful and deeply respectful of the historic significance of the property, which this refurbishment seeks to safeguard and sustain. The proposed signage strategy seeks to strike an appropriate balance between the long history of the property, its place in the town and value to the local community, as well as the reputational value of a carefully considered and well-designed visual identity that embraces all these elements.

“It is vitally important that the hotel guests recognise that the property has undergone a comprehensive refurbishment and that the experience on offer is far superior to what they might have come to expect from the property in the past.

“Signage which is distinctive and well designed, yet respectful and appropriate, is critical to communicating this message. The blue chosen for the body colour of the signage not only emphasises these themes but also complements the blue-grey brick in the Thames Side and Hart Street frontages.” Ms Leo, an international hotelier, and her
co-owner Tim Hartnoll, a Singapore shipping entrepreneur, are refurbishing the hotel at a cost of £3million.

Separate applications have been submitted to the district council for internal and external works. This includes installing a lift and a new side entrance door and refurbishing the courtyard.

Ms Leo also wants to give the west elevation of the Red Lion Stables a traditional three-coat lime render. She says this is needed to stabilise and improve the appearance of the elevation, which has fallen into “considerable disrepair” over the years.

The planning statement adds: “Great care has been taken to understand the building, including the impact of several ill-considered and harmful changes to the property over time which the broader refurbishment programme seeks to reverse. The intention is to bring the hotel back up to a quality and standard that both the residents of Henley and visitors to this important market town would wish to see.”

The hotel dates back to 1632 and was put up for sale last year after being used to house homeless people in the early stages of the coronavirus pandemic.

The latest application has been criticised by Ruth Gibson, secretary of the Henley Archaeological & Historical Group, who objects to the change in name and design of the signs.

She said: “The Red Lion is a landmark building, marked up as such on the Henley conservation area map. It has a dominating position on this important riverside town entrance.

“It has been known as the Red Lion from the early 17th century. The proposal to remove the historic name from this building and replace it with the French word Relais, denoting any coaching inn in France, is very ill-conceived.

“It is also unnecessary as it would be possible to achieve a compromise by joining the two words in the title e.g. The Relais at the Red Lion or, if this is too long, to fit the new fascia the Red Lion Relais would be another possibility, combining the historic name with the new.

“I most strongly object to this proposal as it would be harmful to the historic interest of the building, the setting of the significant adjacent historic landmark buildings and the very character of the conservation area at the very entrance to the historic riverside town.”

A public consultation runs until June 12.