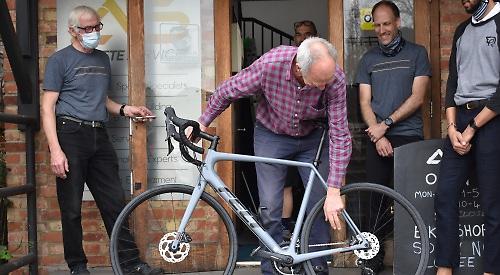 A FORMER pastor in Henley was given a new road bike as a surprise.

Roger Cole retired from Henley Baptist Church at the d:two centre in upper Market Place a year ago and has now moved to Swindon.

Lesh Lethbridge, 24, wanted to present him with a leaving gift as thanks for his work both with the church and the cycling community as well as for teaching him how to repair bicycles.

He raised £2,000 and then lured Mr Cole to Athlete Service in Greys Road car park on the pretext of having a coffee but instead presented him with the light grey Felt road bike in front of a group of his cycling friends.

Mr Cole, who lived in Henley for 17 years, said: “I was not expecting this at all — I am so surprised. It’s lovely as I have so many friends from the cycling community but it’s only in the last year I’ve got involved with these guys, the silver cyclists.

“My wife and I were hoping to buy a second-hand mountain bike if the funds were there. I’ve never had a new racing bike before. I love the road and this will be well-used.”

Mr Lethbridge, an acting pilot officer with the Oxford University Air Squadron, met Mr Cole in 2000 when he was only four after moving to Henley from Kenya with his family.

When he was aged 10, Mr Cole taught him how to fix bikes at his garage in Valley Road, where he ran it at as a business.

He said: “Roger took me under his wing and taught me to be a mechanic, which is what I’m doing now. I owe it to him and so do a lot of people.

“He always under-charges because he’s that guy in the community who always cares about others. He remembers the forgotten and he’s really selfless. He takes on all the jobs other people don’t want to do.”

Mr Lethbridge said lots of people had contributed towards the gift. “I sent messages to a lot of his mates to ask if they wanted to donate,” he said. “It was all word of mouth really.

“We raised about £2,000 but we need other items to go along with the bike, such as pedals and shoes. Any money left over we will give to him to go towards a mountain bike.”

Mr Cole was a pastor for 35 years and his wife Diana used to be a church leader.

He also worked with the Nomad youth and community project at the d:two centre for more than 15 years and was chairman of trustees.

He plans to carry on with his bike repair business in Swindon.

Mr Lethbridge added: “Roger has been a big part of my life.”