When we had two Red Lions (one with shabby reputation) 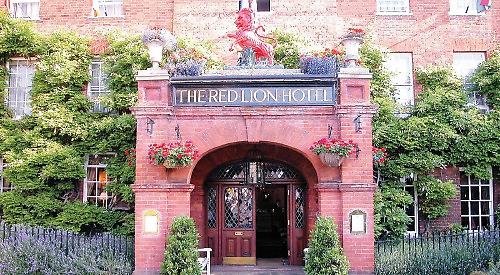 HISTORIAN Elizabeth Hazeldine says she read with interest our report two weeks ago about the Red Lion Hotel in Henley, particularly in reference to hostelries called the Red Lion not being a peculiarity.

Indeed at one time there were two establishments in Henley named the Red Lion.

Elizabeth says: “Itinerant workers and those who did not have the benefit of a tied house, or the wherewithal necessary to rent, turned to lodging houses, the Red Lion in West Hill (now West Street) being one such place.

“Rental entries trace this hostelry back to at least 1795, a red brick building of large proportion with a frontage of some 24ft 6in and depth of nearly 99ft.

“A sales notice that appeared in the May, June and October 1866 editions of the Reading Mercury & Oxford Gazette stated that the Red Lion Beerhouse, under lease to brewers Messrs. Byles & Co, had five good-sized bedrooms, a parlour, kitchen, taproom and cellar as well as a backyard with a well (said to provide good quality water) plus a convenient side entrance.

“The Red Lion seems to have had something of a shabby reputation and thus was not a stranger to the pages of the local press. William Poffley, the Red Lion landlord since 1884 with a sideline as a bricklayer, was a point in fact.

“A calamitous event on November 29, 1892 resulted in Poffley being accused of assaulting a child, Emily Beckett. A warrant was put out for his apprehension and Poffley received notice to quit the Red Lion.

“He fled but was arrested in Reading on June 17, 1893 and the unfortunate fellow found himself in the gaol infirmary, having suffered a broken ankle when jumping from a window in a vain attempt to avoid capture.

“Following the Poffley affair, Superintendent Francis Keal, of Henley police, asserted before the magistrates’ bench that the Red Lion was a house the police had cause to visit practically every night, it being ‘a low common lodging house and beerhouse where tramps go’.

“Not persuaded as to its shortcomings, the magistrates granted a licence to a Mr Bodkin, a London solicitor acting on behalf of Joseph Ayres, who was ‘a thoroughly good character’ according to an unequivocal Thomas Shepherd.

“Upon commencement of his landlordship, Ayres and his wife, Emily, were instructed, via the Oxfordshire bench, to thoroughly clean and whitewash (thought to refer to wiping down with lime to remove bacteria) the Red Lion.

“On June 9, 1906 the licence of the Red Lion expired after fraught negotiations with the licensing magistrate at the Oxford epiphany quarter sessions. The Henley borough justices opposed relicensing the Red Lion and the licence was not renewed. The Red Lion’s owners, Brakspear’s Brewery, were to receive £382 in compensation and Ayres a mere £25.

“His wife had succumbed to cirrhosis of the liver in 1905, aged 45, and his beloved Red Lion was auctioned on August 15, 1907 for use as a freehold property.”

The Thames Side Red Lion, with its long connection to Henley, was much superior to its namesake.

“Nonetheless,” continues Elizabeth, “it was not to escape misfortune, such as befell Thomas Shepherd, the very man who had provided Ayres with a reference.

“He had taken on the Red Lion as landlord (he was also a boat builder) during the spring of 1888 to run with the assistance of four maids, one barmaid, a pantry boy, waiter and book-keeper.

“On the night of November 17, 1898, Frederick Harrison became the last person to see Shepherd alive when the landlord fell down some stone steps.

“Alarmed by the sound, the hotel cook found her master lying prostrate at the foot of the 20 steps. A lad, employed as pantry boy, was sent to fetch Dr Browne. Shepherd succumbed to his injuries before the doctor’s arrival. He was 42.

“An inquest was held at the Red Lion on November 19 before Dr Dixon, the coroner for South Oxfordshire, and Shepherd's body was laid out so that it could be examined by the jury.

“Dr Browne’s opinion was that an apoplectic seizure (stroke) had caused the landlord to fall and he recorded a verdict of accidental death.

“However, that was not the last of Shepherd’s connection with the Red Lion. Two days after the inquest a funeral was held for the hapless landlord, not at St Mary’s Church but at the Red Lion.

“The deceased was to bequeath to his widow, Mary, the not unsubstantial sum of £34,000, leaving her well able to afford to reside at
27 Queen Street.

“So there is a snapshot of the histories of Henley’s Red Lions. I have provided two historical photographs of the riverside Red Lion that depict the hotel’s signage and, I believe, a different lion statue.”