Going down the pan 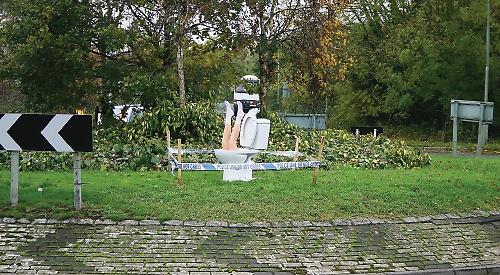 THE mystery practical joker of Sonning has been at it again.

A pair of mannequin legs with white socks disappearing into a toilet bowl appeared on the roundabout on the Reading Road at Playhatch on Monday. The “sculpture” was sealed off by blue and white police incident tape.

It is the latest work of art to appear in the area. In August, a false door appeared on the side of Sonning Bridge. The black door had a letterbox, knocker and keyhole resembling the front door of 10 Downing Street, now the home of Prime Minister Theresa May, who lives in Sonning.

In 2013, a “postbox” appeared on the same bridge and the following year a giant Google Maps-style “pin” was erected on the Playhatch roundabout followed months later by an empty tent and a clothes line.

Somehow, these creations don’t seem to have the same quality (or value) of a “Banksy”. Indeed, you might say they’re bog standard.