PM pops back to Liz's shop for Cenotaph hat 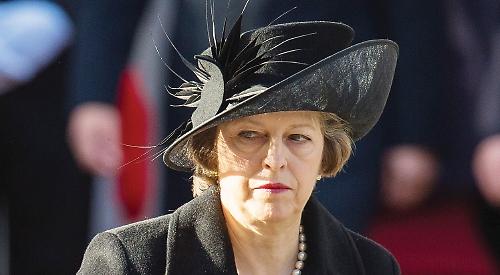 THERESA MAY went back to her favourite Henley milliner for a hat to wear at the Remembrance Sunday ceremony in London.

The Prime Minister was seen by millions of people on TV as she attended the event at the Cenotaph wearing the black felt hat made by Liz Felix at her shop in Duke Street.

The ceremony was also attended by the Queen and senior members of the royal family as well as more than 8,500 veterans and was watched by thousands of people gathered in Whitehall.

Mrs May, who lives in Sonning, has bought hats from Mrs Felix before and popped in only the day before the ceremony to make her purchase.

The hat, which featured an angular crown and upturned sinamay brim, was the first one the she picked out. Mrs Felix, who had made the hat earlier in the week, said: “When I was making it, I was actually sitting there trimming it and thinking, ‘this would be great for the Prime Minister’.

“The funny thing is that, when she came into the shop, I was sitting at the back clearing out my workshop while my sister Lisa went out front to serve her.

“I heard her voice go up in pitch with surprise as she said, ‘oh, hello, how are you?’ I thought, ‘oh, it must be one of our regulars’ and walked out to the front and, of course, it was.

“Lisa was just a bit shocked because she’d never met her before!

“Mrs May tends to just walk into the shop on the day, try a few hats on and buy one.

“This time I got the hat out of the window for her and she liked it so much she didn’t want to try any others. I was just glad to see her wearing my hat when I watched the service on television the following day!

“I was so pleased with how it looked and I’ve had lots of lovely comments from people who knew about it.”

In October last year, Mrs Felix made a red sinamay and felt hat which Mrs May wore when, as Home Secretary, she joined the Queen and then Prime Minister David Cameron to meet Chinese president Xi Jinping during a state visit.

She also made her a white hat with a rounded crown, downturned wide brim and an orange silk flower to wear on the Friday of this year’s Henley Royal Regatta.

Mrs Felix said: “Although she has been in the shop before, I don’t think you ever get used to it!”