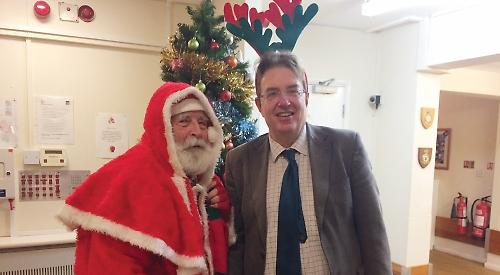 JOHN HOWELL seems to have had enough of the criticism coming his way recently.

The Henley MP has come under fire for the perceived failure of the joint Henley and Harpsden neighbourhood plan to dictate planning policy.

He even disagreed with his fellow Henley Conservatives who messaged him on Twitter, saying: “South Oxfordshire District Council have told us in writing that our plan is out of date due to them not having a five-year land supply.”

Mr Howell replied: “I am telling you I discussed this with the minister and neighbourhood plans are not worthless. They still carry the same weight.”

Now he seems to have adopted a policy of promoting all that’s good in Henley as with almost every tweet about the town he uses the hashtag “Henley great place to live”.

Not only that but he has been promoting his visits around the constituency trying to raise some festive cheer.

He went to the Leonard Cheshire Home in Burcot and donned reindeer antlers while posing for a photo with Father Christmas.

For these posts, he has included the hashtag “An MP for the whole constituency”.

Did anyone doubt it, John?