Mayor: we must pass on baton of remembrance 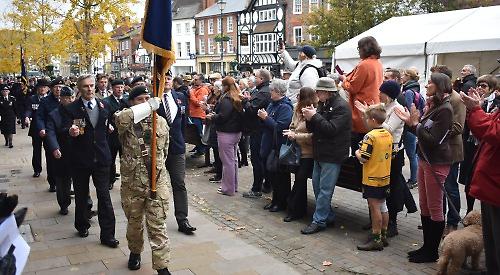 MORE than 1,000 people attended the Remembrance Sunday service in Henley.

The ceremony in Market Place was led by Rev Jeremy Tayler, the rector of Henley with Remenham.

It was attended by the Mayor Sarah Miller, fellow town councillors and other civic dignitaries.

More than 30 groups and organisations laid wreaths on the town hall steps, including cadets, scouts, girl guides and the emergency services.

As residents arrived, a list of names of the fallen was played over the loudspeakers.

There was then a procession from Greys Road car park led by the army cadets followed by the navy cadets, sea cadets, representatives of the Royal British Legion, police and fire service, beavers, cubs, scouts, brownies and guides, all led by their standard-bearers.

The choir from St Mary’s Church in Hart Street walked up to Market Place led by a cross-bearer and stood next to the town hall steps.

The Mayor’s party then came out of the town hall, led by town sergeant James Churchill-
Coleman carrying the ceremonial mace and followed by Councillor Miller in her ceremonial robes accompanied by the mayor’s cadet Cpl Grace Iveson. They were followed by other councillors also in their ceremonial robes, town clerk Sheridan Jacklin-Edward, Lady Hall, Deputy Lord-Lieutenant of Oxfordshire, accompanied by the Lord-Lieutenant’s cadet Oskar Jordan-Barber of the Oratory School’s cadet force, and John Howson, chairman of Oxfordshire County Council.

Rev Tayler began the service, saying: “My brothers and sisters, today we gather, as we do each year, to pray for peace in the world God made, for which so many have laid down their lives and for which many continue to die, day by day.”

Anne Evans, who chairs the Henley and Peppard branch of the Royal British Legion, then read from the poem For the Fallen by Laurence Binyon. The Last Post was sounded by Gregor Spowart, of the Woodley Concert Band, on the cornet to mark the start of the two-minute silence. It ended wih him playing Reveille.

Mrs Evans then read the kohima epitaph: “When you go home, tell them of us and say for your tomorrow we gave our today.”

In her speech, Cllr Miller said: “It is so important at this time of year, every year, that we come together and we honour the memory of those who’ve lost their lives in the service of our country.

“Today we remember the sacrifices made by young men and women and those who serve to secure and preserve our freedom.

“We remember all of the fallen in all conflicts who gave their lives for us. We remember the many injured on the battlefields, those who have suffered and still do suffer from the physical and psychological scars of war.

“And we remember the parents and loved ones who bear their own scars — we feel their pain and remember their lost loved ones. We thank the Royal British Legion and the many more organisations who care for our service people.”

The Mayor then spoke about her grandfather, William James Smith.

She said: “He fought in the Second World War with Montgomery in Italy, the 8th Army, who were known as the ‘Desert Rats’. Like many who served, my grandfather never spoke of his army life; some memories were just too painful for him.

“But the support and care from his local Royal British Legion in Ferndown, Dorset, was invaluable, as it is to all members, who number among them serving and ex-serving personnel and their families.

“The Royal British Legion, now in its 100th year, is the main custodian of remembrance and we thank them for this and we wear our poppies with pride.

“Buying a poppy in the lead-up to Remembrance Sunday isn’t just about honouring the sacrifices of the First and Second World Wars, it’s about supporting the vital work they do in modern Britain. The Royal British Legion support starts after one day of service and continues through life, long after service is over.

“Today in my town, the people of Henley-on-Thames and those in the surrounding villages, we salute you, we say thank you and we remember.

“Thank you to those who have brought children and grandchildren here today. It is important that they share in this act of remembrance, the baton is being passed down.

“As a parent myself, I see the importance of the next generation continuing to support the work of the Royal British Legion and all that it does. Thank you to the young people from local youth organisations for you all represent our future — a future of peace, tolerance and inclusion.”

Cllr Miller ended by reading a poem, On the Western Front by Alfred Noyes.

The crowd then sang I Vow to Thee, My Country.

This was followed by a bible reading by Cpl Iveson from the book of Romans.

The crowd then sang the National Anthem and some members of the parade saluted or took off their hats.

Wreaths were then laid by the Mayor, Lady Hall, Councillor Howson and Councillor Stefan Gawrysiak on behalf of South Oxfordshire District Council. A wreath was also laid on behalf of Henley MP John Howell by Daniel Bausor.

John Green, president of the Henley and Peppard branch of the Royal British Legion, laid a wreath before taking off his bowler hat and holding it by his heart.

He also touched the names of the Hughes family, which are engraved in the list of war dead on the town hall memorial. These were the family of Brian Hughes, the former branch standard-bearer and fundraiser who died in April last year and used to touch their names when he laid his wreath.

Henley Quakers laid a wreath of white poppies, which were first worn in 1933 by the mothers, sisters, wives and friends of men who died in the First World War to symbolise peace.

Capt Thomas Fearn, detachment commander of the Henley Army Cadets, then marched over to the Mayor to salute her before ordering the procession of the cadets and youth groups to march around Market Place.

The spectators applauded and the cadets and youth groups saluted or waved to the Mayor as they came back around to the town hall.

A planned fly-past by aircraft from RAF Benson did not take place because of the low cloud.

After the service, the Mayor invited the public into the Queen Elizabeth II Hall at the town hall for refreshments. Among them were Richard Pinches and Judy Pinches-Ray who attended the service on behalf of their father Peter, who was also a Desert Rat.

Mr Pinches, who was wearing his father’s war medals, said: “We thought the service was very good. It was great to have it back in person.”

Mr Green said: “I thought this service was one of the best we have had. It was very inclusive the way the cubs and scouts were all brought to the front. It bodes well for the future. The Mayor talked about passing the baton on and we hope that’s going to continue.”

Cllr Miller said: “It was a really lovely morning and very moving. I’m delighted everything went to plan and the sound system worked. It was lovely to have all the scouts and guides involved.”

• About 80 people observed a two-minute silence in Henley market place on Armistice Day on Thursday last week. The ceremony was led by Mrs Evans, who was joined on the town hall steps by the Mayor and other councillors. Bugler Stuart Henderson signalled the start of the silence by playing the Last Post and brought it to an end with Reveille.