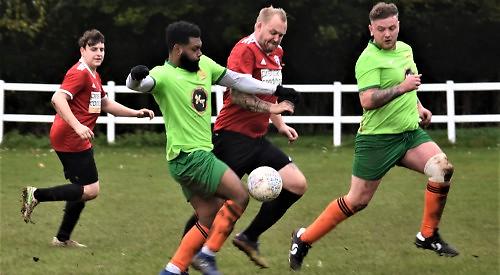 HENLEY TOWN inflicted the first defeat of the season on hosts SB PHOENIX as they ran out 2-1 winners in their Division 1 clash last Saturday.

The opening 10 minutes was an even contest with neither team threatening to score.

The first chance of the match fell to the Phoenix striker who was played through on goal but a fine low save from Isaac Aitchison kept the scores level.

Henley started to grow into the game and took the lead when a Harri Douglas throw-in was flicked on by Harry Geyton into a dangerous area where Charlie Douglas pounced on the loose ball from close range to give the visitors the lead.

Henley almost doubled their lead when a back pass from the Phoenix defender was played short, Charlie Douglas managed to get a shot away but was matched by a good save.

Henley did make it 2-0 when a Harri Douglas corner was met by Will Churchward who smashed the ball home from just outside the six-yard box.

Phoenix played better in the second half but thwarted by some fine saves from Aitchison.

Henley had a chance to put the game to bed when Sema Kakembo shot just outside the box but his effort was kept out by the Phoenix goalkeeper tipping it round the post.

Phoenix pulled a goal back with 10 minutes left when their defender tapped into the net following a goal line scramble.

The home side kept pushing for the equaliser but the Henley defence managed to keep them out. Elsewhere in the division, GORING UNITED slipped to defeat at ELDON CELTIC. Trailing 1-0 at half-time, United eventually lost out 4-2 with an own goal and Tommy Edwards scoring for the visitors. Meanwhile ROTHERFIELD UNITED went down to a 3-0 defeat away at undefeated league leaders HURST.

Elsewhere in the division, HAMBLEDEN RESERVES ran out 7-3 winners in the battle of the two basement sides at TAPLOW UNITED RESERVES. Going into the match both teams had failed to register a point from their opening six matches. Gabriel Pinto netted four goals for the visitors whilst Luke Logan and Chris Sanger were also on target.

HENLEY TOWN DEVELOPMENT moved to the top of Division 4 thanks to a 7-1 home win against SB PHOENIX DEVELOPMENT.

Fred Kirby opened the scoring from the penalty spot before Will Jaycock, Guy Brown and Hugh Barklem all scored to make it 4-0 at the break.

Brown added his second of the game with Luke Mulvaney and Tom Taylor wrapping up the scoring for the hosts. The visitors pulled a goal back late in the game.