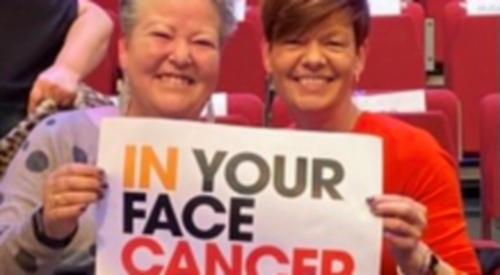 TWO sisters raised more than £7,300 for charity by having their heads shaved.

Marion Virgo is currently having treatment for terminal cancer and Sarah Virgo-Harris wanted to support her.

They had their hair cut off at Mrs Virgo-Harris’s home in Goring high street, where her sister is staying temporarily as part of a family support bubble.

Ms Virgo, 52, of Wayside Green, Woodcote, was shaved by her brother-in-law Tony Virgo-Harris, a Goring parish councillor, and Mrs Virgo-Harris was shaved by the couple’s 15-year-old son Theo while their 12-year-old daughter Nica watched.

The 10-minute event was broadcast live on the Facebook page of the neighbouring Virgo Beauty salon, which Mrs Virgo-Harris has run since 2014.

Hundreds of supporters watched online and many left comments praising the women’s “new look” or sharing their own experiences of fighting cancer.

Nikita Patel, whose parents Jayesh and Varsha run Westholme Stores in Wallingford Road, Goring, said: “You are both amazing! Love the concentration, Tony and Theo.”

Villager Sarah Loveland said: “Tony has missed his vocation in life — when is the Tony Barber Shop opening?”

Ms Virgo, a health and safety consultant, has previously fought breast cancer and was given the all-clear.

However, in the autumn she started experiencing lower back pain and was told by doctors that the disease had spread to her spine and could no longer be cured. She is receiving palliative chemotherapy at the Royal Berkshire Hospital in Reading.

Knowing her hair would fall out as a result of the treatment, the sisters decided to both have their heads shaved. They had hoped to have this done at the Albert Fields hair salon in Goring but had to think again because of the Government’s coronavirus restrictions.

They have received more than £6,000 in donations for Cancer Research UK and raised another £1,300 with a raffle of vouchers for treatments at the salon, which can be redeemed when it is safe to
re-open.

Mrs Virgo-Harris, 48, said: “We wanted to draw something positive from Marion’s experience because she’s such a strong person and it’s all about making the best of what happens.

“However, I’m not a runner so any kind of sporting challenge was out of the question. In the end we thought a shave was fitting because lots of people do that for Cancer Research UK.

“It can be very emotional to lose your hair and it’s much easier to shave it off than see it coming out in stages on the pillow or in your hands.

“We did a little video explaining our plans and got a huge response, which was really pleasing. My clients have smashed it out of the park and we’re incredibly thankful to them. I’d hoped for £1,000 and prayed for £3,000 so to get more than double our highest expectations is unbelievable.

“It’s not just about the donations, though, but the emotional support. It has been touching and uplifting to have so many people showing us love.

“The shave itself was fun and I didn’t feel nervous. I was pretty excited and glad to do whatever I could to help Marion. We had a good laugh together and that’s what it’s really about.

“It was also a pretty novel experience for Theo because — well, how often does a teenager get to shave their mum’s head?”

She said her hair was growing back surprisingly quickly but she is considering keeping it short in future.

She said: “I’ve always had a cropped style and never kept my hair that long anyway, but it’s nice not to have to wash it so often.

“I’ve had to pop to the salon a few times and I wore a hat every time because it has been so cold.”

The business has been awarded a £4,000 government grant to furlough its staff until the end of April.