From pigsty to futuristic HQ 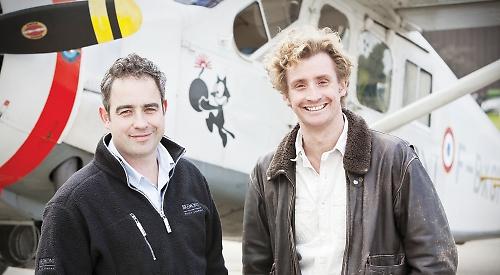 THIS is the first glimpse of a luxury watch firm’s new state-of-the-art headquarters in Henley.

Bremont plans to move into the wing-shaped building which will part of a new purpose-built complex on land at Sheephouse Farm, off Reading Road, immediately south of the Jubilee Park playing fields.

The land currently contains disused piggery buildings, which will be demolished.

Bremont, which is currently based at Sawmills, off Marlow Road, already has planning permission for an 18,000 sq ft building at its new site.

Now it is seeking consent for a 34,000 sq ft premises as the business is growing more quickly than expected.

The development would also include larger external plant and 107 car parking spaces compared with 58 in the original plan as well as 28 cycle spaces. It would also require a new access from Reading Road. The new building has been designed by the award-winning Henley architects Spratley Studios.

Nick English, who co-founded Bremont with his brother Giles in 2002, said: “I think it’s absolutely stunning. It’s going to be a building that people will want to come and visit.

“It’s quite hard to design something where people can work and be a bit of a landmark and I think they have done a really good job of achieving both.

“The building will able to hold 250-odd employees, which is great and allows us to really make Henley the home of British watchmaking, which is something Giles and I have always wanted to achieve.”

Mr English, 46, from Bix, said the main reason for moving was to have everything under one roof rather than at several different locations.

He explained: “The plan is to do everything there, from parts being manufactured to watches being assembled.

“The surface area hasn’t really changed. Because it’s a wing-shaped building we have increased the height and lowered the floor by half a metre to allow two floors.

“There’s a huge amount of effort that goes into something like this both externally and internally — a dust-proof environment with positive air pressure and very different from a normal building.”

Mr English added: “This is about future-proofing and not having to move again in five years or 10 years’ time.

“We’re immensely proud to be part of Henley and the local area and want to contribute. If you look at the workforce we have already not only is it quite young but also local.”

Both Bremont’s existing and future sites are part of the Culden Faw Estate, which is owned by billionaire Swiss financier Urs Schwarzenbach.

The company submitted its original application in February last year but then realised that it would outgrow the building.

A planning statement by chartered town planners JPPC says: “Analysis showed that the business was likely to expand considerably such that employment at the site would grow by some 10 per cent per annum over a
10-year period.

“At this level of growth the permitted buildings would require expansion very soon. As a consequence, the architects were requested to pause design work on the permitted scheme and to consider how the predicted workforce would be able to be accommodated on the site.

“In doing so, Bremont took the decision that the buildings provided should seek to accommodate its predicted 250 workforce, even though upon first occupation the buildings would be too large to meet its immediate requirements.

“Analysis showed that the permitted scheme would need to be revised and the floor space provided increased.

“The architects were instructed to consider how this could be achieved without compromising the design idiom, appearance and landscaping of the permitted scheme.

“The southernmost building retains its high-quality contemporary design with its curved roof form and glazed frontage.

“It would be re-sited to the south, altered by the insertion of a mezzanine in part of the building, and overall would be only some 0.8m higher than that already permitted.

“The area of plant would be increased and the rear building would become two-storeys.

“However, the ground floor would be set down into the ground such that while it would have a larger footprint it would be only some 1.8m higher than that approved.” Bremont hopes to relocate in early 2019 from its current, award-winning building where it has been based since 2013.

It was previously based in both Hurley and Switzerland.

The English brothers are the sons of a former RAF pilot and aeronautical engineer and have been flying enthusiasts since they were children.

In 1995 Nick and his father Euan were involved in an air accident while practising for an air show in a wartime plane. Mr English died and Nick broke more than 30 bones and was not expected to live.

Six months later, however, he was back in the air being flown by Giles.

The brothers realised life was too short to waste time and decided to do what they enjoyed most — creating mechanical devices.

Their company has grown rapidly. It now has boutique stores in London, New York and Hong Kong and has a reputation for making unique and limited edition timepieces.

It has made watches including original parts from HMS Victory as well as a model which included some of the original fabric from the Wright Flyer, the first powered aircraft that flew in North Carolina in 1903.

Last month Bremont became the official timekeeper for Henley Royal Regatta and will provide the stopwatches to time this year’s races.

South Oxfordshire District Council will make a decision on the application by August 30.