Councils divided over watchmaker's move to new larger base 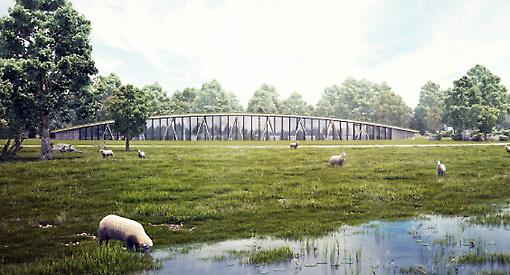 PLANS by a Henley luxury watch company to move its headquarters have been welcomed by town councillors.

But parish councillors in neighbouring Shiplake have objected to the company’s application to create a new purpose-built complex on land at Sheephouse Farm, off Reading Road, immediately south of the Jubilee Park playing fields.

Bremont, which is currently based at Sawmills, off Marlow Road, says it needs to relocate as its workforce is growing more quickly than expected.

It already has planning permission for an 18,000 sq ft building at the new site, which is a disused piggery, but has changed the design so the footprint would be 34,000 sq ft with 107 car parking spaces compared with 58 in the original plans.

The new wing-shaped building, which was designed by Henley architects Spratley Studios, would be able to accommodate up to 250 staff.

Mayor Kellie Hinton told a meeting of the town council’s planning committee that she was happy with the new design, saying: “I see no reason to refuse it.”

Councillor Stefan Gawrysiak agreed, saying: “The reason I am in favour is that it’s employment, it’s on an A road and I think this is a high-quality design.

“The only thing I would suggest is getting a bus similar to Invesco Perpetual to help reduce traffic flow.”

Deputy Mayor Lorraine Hillier said the development was a good thing for Henley.

Councillor Julian Brookes said he was concerned the development would conflict with the joint Henley and Harpsden neighbourhood plan.

“I’m going to vote against this,” he said. “I agree it is a high-quality manufacturer and the right type of employment but there is a site for a commercial development down the road at the old Wyevale garden centre. I want to support them but this is in the wrong place.”

The company’s relocation is planned to take place in early 2019. Both sites are part of the Culden Faw Estate, which is owned by Swiss financier Urs Schwarzenbach.

The application says: “Analysis showed that the business was likely to expand considerably such that employment at the site would grow by some 10 per cent per annum over a 10-year period.

“At this level of growth the permitted buildings would require expansion very soon.

“As a consequence, the architects were requested to pause design work on the permitted scheme and to consider how the predicted workforce would be able to be accommodated on the site.

“In doing so, Bremont took the decision that the buildings provided should seek to accommodate its predicted 250 workforce, even though upon first occupation the buildings would be too large to meet its immediate requirements.”

The council says: “[It] is a huge increase on the previous application in size of building, number of employees and vehicles. No information is given on traffic movements, number of cars, cyclists and pedestrians, nor access and exit provisions.

“The location is unsuitable for such a big development. Volume of traffic generated would further exacerbate the existing high volume of traffic on the A4155. The entrance would be on the 50mph section and would pose considerable safety risks. There is no provision for pedestrians and cyclists. The extra traffic would add to the air pollution problem in Henley.

“The scale and bulk of the buildings would have a detrimental impact on the semi-rural area.”

South Oxfordshire District Council will make a decision by August 30.