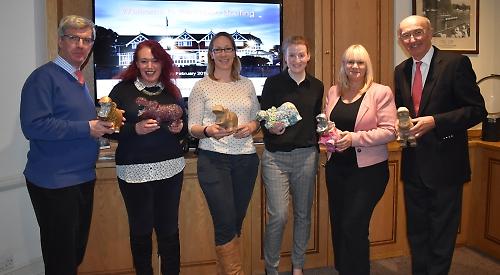 LEANDER Club has launched a community art project to celebrate 200 years since it was founded.

The creations will then be put on display at the River & Rowing Museum on May 22, as well as around the town in the summer.

A hippo has been part of the club’s logo since the mid-1800s.

Each papier-mâché hippo is 18cm by 28cm and will be painted, papered, embellished, dressed or decorated in any way the participants want.

They will be put around businesses, shops and homes in the town in May and will be on display until late June.

All the hippos will return to Leander on July 22 for the club’s family day.

The organisers will create an arts trail, showing where the hippos are being displayed so visitors can go around the town to look at them all.

At the end of the project some will be returned to the creators and others will be auctioned off for charity.

The project was launched at Leander Club on Tuesday (20) by general manager Paul Budd, house manager Caroline Mulcahy and Shelley Robertson, of Wilson Avenue, Henley, who came up with the idea.

“It’s great for everyone to get involved and it’s an amazing way for people to come up with something creative.

“We had some decorated hippos here for the briefing so people can get a sense of what could be achieved.”

Mrs Robertson and her friend Nancy Marcello both made some examples, which were shown to guests at the launch.

Mr Budd welcomed about 40 artists, rowers and school representatives to the launch event.

He said: “It’s a very exciting project. Everyone I have spoken to about it has picked up the enthusiasm and has some interest in the hippos.

“The hippo has been part of our regalia since the 1850s. The hippo being the king of the river, it seemed to be a useful emblem for us.

“Part of what we want to do is reach out into the local community in some way and not just celebrate our 200 years but the links Henley has to rowing – which are substantial and deep routed.”

To mark the bicentenary the club is holding events across the world throughout 2018.

This included the launch of The First 200 Years, a 300-page book put together under the editorship of member Andy Trotman chronicling the history of the club, last month.

The hippos will also be used as be part of this year’s Henley Royal Regatta window display competition.

Organiser Carolyn Molyneux, who runs Delegate Office and Conference Services, off Hart Street, has agreed for all the shops that enter the annual competition to be given one of the decorated hippos to notify the judges they are taking part.

Paul Mainds, chairman of club’s bicentenary committee, said: “There are more than 20 events and activities to date. It’s a very important year for us.

“I want to thank you for your enthusiasm for the project and I look forward to seeing the results.”

Anyone who has a hippo to decorate must return it to the club by April 24.