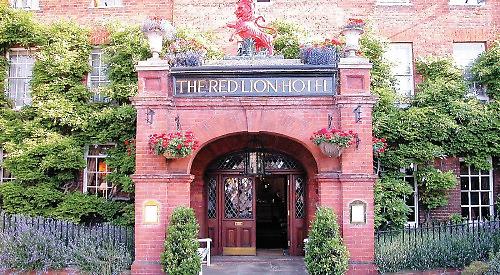 A PLAN that could have seen an historic hotel in Henley turned into a care home has been withdrawn.

MG Hotels, which owns the Red Lion on the corner of Hart Street and Thames Side, had submitted a planning application to convert it into a “residential institution”, as exclusively revealed by the Henley Standard.

It could also have become a hospital, nursing home, boarding school, residential college or training centre.

But this week South Oxfordshire District Council, the planning authority, said the application had been withdrawn.

The plan was put forward just a month after the Grade II listed hotel was put up on the market for offers in the region of £7.5 million.

It has been used to house 12 homeless people during the coronavirus pandemic but will re-open tomorrow following the easing of lockdown restrictions.

Councillor Will Hamilton called the proposal “absolutely the wrong thing for Henley” adding: “This is a town amenity, a facility that is used by visitors to our town, and, in its prime position, it needs to continue to be a hotel.”

Councillor Donna Crook said: “It needs to be protected and kept as a vital place for tourists to come and stay. It’s right in the centre and a care home wouldn’t be good, it’s not practical.”

The Henley Society also objected saying the hotel was a “landmark” building and the district council’s emerging Local Plan recommended that the amount of hotel accommodation in Henley should be increased.

The Red Lion is owned by MG Hotels, which also owns the Manor Hotel in Datchet.

Along with its 35 en-suite bedrooms, the hotel has a bar, restaurant, conference suites and events facilities for up to 200 guests as well as 25 parking spaces.

The freehold is being marketed by estate agents Knight Frank, who describe the business as a “prominent riverside boutique hotel”.