Headteacher who helped school to believe in itself 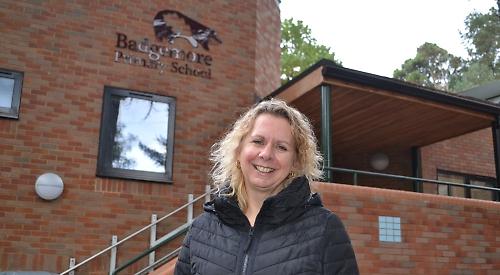 FOR most of the last 30 years, Badgemore Primary School has been the least popular choice for parents of young children in Henley.

That was until the arrival of Jacky Steele as headteacher in April 2014.

She has led the transformation of the small school in Hop Gardens from one with an Ofsted rating of “requires improvement” to one rated “good”.

Ms Steele puts it down to “a bit of TLC” but it’s clear that this is a woman with considerable leadership and organisational skills, a fearless dedication to her work and a passion for nurturing children.

The 53-year-old mother of two, who is originally from Preston, has spent most of her working life in teaching, including 14 years at Alfred Sutton Primary School in Reading, the last three as deputy head, before she came to Henley.

Badgemore is her first headship but the job obviously comes easy to Mrs Steele with her down-to-earth demeanour and friendliness with staff, parents and children alike.

It is not unusual to hear her calling a child or parent “luvvie”.

But she has not shied away from making changes either to staff or the school’s old ways with her supportive style of leadership.

She has encouraged staff to believe in their ability to teach, made learning to read and write more enjoyable for the children and persuaded parents to become more involved with the school.

More recently, she has introduced a new uniform and logo, ensuring the children and their parents were involved in the process, and overseen the opening of a multi-million pound extension.

This has given staff, pupils and, crucially, parents more confidence in their school.

“I was very aware of the reputation that Badgemore had, that it was not the school of choice for parents in Henley and it had been that way for 30 years,” says Ms Steele. “That was my biggest battle and challenge.

“It takes years to build a reputation but it takes seconds to trash it. The only thing that was going to change our reputation was improving standards — and we did.”

She recalls being shown round the school by the late Mike Lewin, who was then chairman of governors, in the summer of 2013.

“I could just see it needed a bit of TLC,” she says. “The day I came for the interview I remember talking to the staff and listening to some of their stories and just thinking that I could probably make a difference.

“For me, in order to be truly successful, everybody has to work as a team and has to want the same thing and as I was talking to the staff it became absolutely clear they wanted exactly the same as I did.

“Even before I got the job I knew the staff would be totally supportive of change and they were ready for it.”

When she actually started work the following spring, Ms Steele admits the school was in a “really difficult” place.

“The Ofsted report in 2013 made clear that previous leadership was ineffective and I truly believe a school needs effective leadership,” she says.

“For me Badgemore needed a style of leadership that was inclusive and cohesive as I think that was missing. There were mixed messages and a lack of consistency.

“The first thing I had to tackle was children’s and staff’s self-esteem. When I walked in they were really on their knees. Nobody felt confident to teach, the children didn’t feel confident with their learning.

“I’d walk into classrooms and be confronted with children with heads on their desks and in tears because they couldn’t do something. I had to get those children believing in themselves.”

Badgemore serves a catchment area that the headteacher calls “diverse” and says ranges from the housing estate directly adjacent to the school to the Assendons and Shiplake.

But Ms Steele says: “All my parents are as deserving of anything we have to offer but I don’t think that has always been the way.

“Some of the parents came here as children and didn’t have a great experience. It’s important now that my families have a very positive experience of school. It’s almost unheard of for me to have my door closed. Parents are very confident that they can come and talk to me if there’s a problem. You have to build that trust.”

She began straight away making small changes, such as ensuring the school gate was opened at 8.30am every day rather than at the last minute so that children could come in and play and parents could socialise. She also held coffee mornings.

She also introduced Talk for Writing, a comprehensive, structured programme for teaching children how to write, and ERIC, or Enjoy Reading in Class.

Ms Steele says: “There were children sobbing on their way from class out into the playground and I was horrified. Why on earth would children be reduced to tears by the thought of reading a book? There was not a reading culture.

“We changed that straight away and the children love it.”

She also encouraged outdoor learning, which she says is engaging, motivating and stimulating.

“My philosophy is developing the whole child,” she says. “Results are important, but not at the expense of the child.”

The school announced in May last year that it would introduce a new, smarter uniform.

A new logo was created by Lisa Wrake, from Remenham, a multi-
media designer whose son Joe is a pupil. She based the design on the suggestions of a focus group comprising teachers, parents and pupils.

Ms Steele says: “The parents were sent a survey and said they preferred to change to a shirt and tie.”

But the biggest factor in the school’s progress was the introduction of what she calls the “growth mindset”.

Ms Steele explains: “There’s a belief that mindset is either fixed or growth. Growth mindset means that actually, with effort, you can achieve anything. We had to change our language and the way we talked to children. It’s the thing that made the most difference to our children. It stopped them dropping their heads and giving up.

“As a result, all our teachers are excellent and this, of course, has had an impact on our standards and on our profile.”

The results of her work were beginning to show within months of her arrival and were confirmed with the Ofsted inspection report in July 2015.

Jeanie Jovanova, who inspected the school, said: “The highly skilled headteacher, ably supported by an effective governing body, has successfully improved the quality of teaching and pupils’ achievement so that they are now good.

“The headteacher has established a thriving and committed learning community in which everyone plays their part to produce increasingly strong outcomes for pupils.

“Staff have embraced new training and higher expectations and good quality teaching is now the norm.”

She said that a number of pupils in each class showed “outstanding behaviour for learning through their exemplary attitudes and exceptionally high levels of engagement”.

Ms Steele was delighted at the recognition of the school’s hard work.

“It was overwhelming,” she says. “We had the feedback and then we went in to talk to the staff and had a little bit of a celebration.”

Several staff went to see Mr Lewin to tell him the good news.

“He wasn’t well at all and he died the following month,” says Ms Steele. “I’m just glad that we did it while he was still alive. Without him none of this would have happened. He was determined and utterly focused and when he decided to support something, he gave it his all.”

So what of the future?

Ms Steele says: “My response is not to let up but stick the foot down a bit harder. My expectations of staff are very high — they have to be able to get the best out of the children and everyone on our staff team recognises this.

“The key thing is that we are a team. I can’t make changes by myself. I work with people, I don’t tell them what to do.

“We also have to work in partnership with parents. I believe education is about the whole child. I want them to be really well-rounded individuals.

“I don’t care whether they come from St Mark’s Road or Luker Avenue. They all come in ready to learn at varying degrees and they absolutely deserve to do their best.

“We’re not rigid and that might surprise people because our uniform is very smart and our children behave beautifully. What matters is that the children feel proud to wear it.”