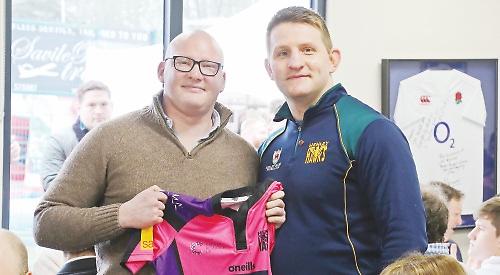 The 29-year-old fly-half died on Sunday — just two months after marrying his partner Elle Thomson at St Mary the Virgin Church in Hambleden.

He was diagnosed with lymphoblastic lymphoma, a rare type of blood cancer, in February 2017.

He went through two bouts of chemotherapy and had hoped for a bone marrow transplant from his sister but in May he was told by doctors that the disease had spread and was incurable.

Mr Comben, who lived in Marlow, had written about his fight with the disease on his online blog.

In his final post two weeks ago, he wrote about the wedding and how happy it had made him.

The couple planned the ceremony in just four days and travelled from the service to the reception for 130 guests at the Bounty pub in Bourne End in a baby blue 4.2-litre Jaguar E-Type and a boat across the River Thames.

Mr Comben said: “A day of love, genuine love, joy, happiness and celebration is what we wanted and it’s what we got!

“Those words couldn’t be truer and Elle and I are forever grateful for making our day simply put the best day of our lives!!! I’d do it all again in a heartbeat.”

Many of Mr Comben’s former team-mates at Henley Rugby Club attended the wedding on June 3.

Nigel Dudding, the Hawks’ director of rugby, who was among the guests, said: “James has been a very brave young man and we had hoped the diagnosis was early and things would be treatable.

“Right up to the last moments, even when he was going through these trials and tribulations, he kept a smile on his face and showed bravery.

“A lot of the players went to his wedding and he was very much at peace. He was the best we had seen him in months.

“It was very hastily arranged but it was a great day and evening. It will be a lasting memory for everyone to see him so happy.”

Mr Comben joined the club’s youth set-up when he was 17. He made his debut for the Hawks, the club’s first team, in 2009 and went on to represent them 167 times.

He was instrumental in the two promotion campaigns in 2013 and 2015. In the 2014/15 season he finished in the top five point scorers in the league.

Mr Dudding said: “I will remember him as a very dedicated and loyal member of the club who was instrumental in helping us get promoted in two seasons.

“He was talented and had an exceptional eye for a break and space and was an exceptional goal kicker. He was a quiet and unassuming man and took his level head on to the playing field.”

Former club chairman Mike Trethewey called Mr Comben “a perfect gentleman”. He said: “I used to travel on the team bus to away matches and James was always polite. He was just a great guy.

“For the four years I was chairman James was the go-to number 10. I think he near enough played every game and was particularly important to the club during the promotion year in 2015.

“He was a huge servant of the club and was a great player on the pitch.

“For me, his decision-making stands out, which is crucial when you are playing at 10.”

In a statement, the club said: “All our thoughts are with his family and friends, in particular his wife Elle, his parents Nigel and Liz and sisters, Susie and Christa.

“For anyone wanting to come down and pay their respects, we will have a short period of reflection before the game against Ampthill on Saturday at 3pm.

“The club will acknowledge James’s fantastic contribution to Henley Rugby Football Club and these plans will be announced in due course.”

Mr Comben was diagnosed with T-cell lymphoblastic lymphoma while recovering from a rugby injury he suffered playing against Old Elthamians.

He underwent eight months of chemotherapy before a scan in October last year showed he was clear.

However, just days after Christmas, his symptoms reappeared and he was told his cancer had returned. He had more chemotherapy followed by radiotherapy treatment.

The club held a charity day in March to coincide with the Hawks’ home game against Canterbury at Dry Leas in March. This included a lunch attended by 190 guests.

The Henley players, who wore pink shirts made specially for the occasion, all donated their match fee.

Mr Comben and the club presented the cheque to the charity in May.