Youth Festival sees children of all ages take to the stage 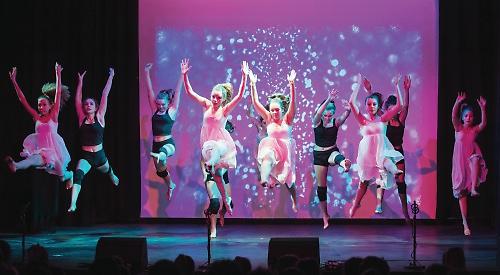 CHILDREN of all ages demonstrated their talents at this year’s Henley Youth Festival, writes Kate Swinburne-Johnson.

At the Dance and Junior Dancer event on Friday and Saturday, there was an array of styles and techniques on show from contemporary to Irish dance to tap.

Parents and performers braved the snow on Saturday for the show at the Kenton Theatre in New Street featuring cheerleaders, ribbon dancers and hip-hop dancers.

Some took to the stage for the first time while Flo Wakely and Freya Smith celebrated dancing together at the event for the sixth time.

The StageWorks Performing Arts School put together a 10-minute medley called “Dance through the Decades” to mark the festival’s theme of “celebration”.

Students from Chiltern Edge School in Sonning Common performed a street dance showcase they had learned at a workshop earlier in the week with instructors from Urban Strides.

Special advisor Steph Maxwell said: “I could clearly see the love of dancing and performance and the audience was captivated.”

Jennamarie Smith, a dance teacher and chairwoman of Henley Amateur Operatic and Dramatic Society, said: “I was so impressed by the amount of hard work and dedication that the children showed.”

Julie Green, one of the organisers, said: “What united all the performers was the joy on their faces.”

On Wednesday last week, the festival’s Entertain evening was held at the Kenton.

The show included comedy, singing, gymnastics, ballroom dancing and drumming and was compered by Genna Schafer and Riley Butcher.

Springbox Gymnastics started the show with a gymnastics display, followed by George Weatherley-Bates and Martha Dickson performing a routine to Believer by Imagine Dragons.

George said: “It was really fun and I want to do it again next year.”

Martha added: “I have performed at three youth festivals and I really enjoy it. I love Henley Youth Festival!”

Eddie Pratt and Maddie Wakefield performed ballroom dancing and Eddie returned later to play guitar and sing a song he had composed.

Didi and Felix Richardson, who won Henley’s Got Talent earlier this year, returned to the theatre with their guitar and drum act while Oscar Scannell played solo drums to an Eighties medley.

Steph Maxwell, who organised the event, said: “What a spectacular array of young talent we had. For some performers it was their very first time on stage and our youngest, Adam, who performed a comedy routine, said he was already thinking about what he will do next year!”

More than 80 musicians took part in festival Proms at the Kenton on Tuesday last week.

They included the Henley Suzuki Violin Group, who performed Palladio by Karl Jenkins with a drum and bass guitar accompaniment.

The string and flute ensembles from Henley Music School and its clarinet and saxophone group closed the show with a performance of the music from Beauty and the Beast.

Laura Reineke, director of the music school, said “We love performing at the Henley Youth Festival. It is a wonderful event and a fantastic performance opportunity for music school groups and individuals.”

The choir and chamber choir from Gillotts School also performed with some doing solos, while other students helped behind the scenes.

Year seven pupil Katy Shaw said: “It was my first time playing piano on the stage at the Kenton. The audience was encouraging and I really enjoyed it.”

Mae Reineke, who has been playing at the festival since she was five, played the cello and Raphael Conte gave a rendition of Copland’s Hoedown.

The festival’s Sing event also took place at the theatre with about 60 children performing to instrumental accompaniment or a backing track or unaccompanied.

There were soloists and groups who sang music by artists including Queen, U2, Ed Sheeran, Cindy Lauper and Little Mix. Rose-anna Nicholson, eight, said: “It was the best singing experience I’ve ever had — I can’t wait to do it again next year!”

Liz Balmford, who was a special advisor at the event and gave feedback to the performers, said: “It was a great evening and I got swept away by many of the performances and found myself lost in the pleasure of the moment.

“The young performers showed tremendous courage being up on that stage. It takes guts to stand and be visible, to make your voices heard and to communicate with an audience.

“They are building crucial life skills and the confidence they gain from these sorts of experiences will stand them in very good stead in their future careers.”