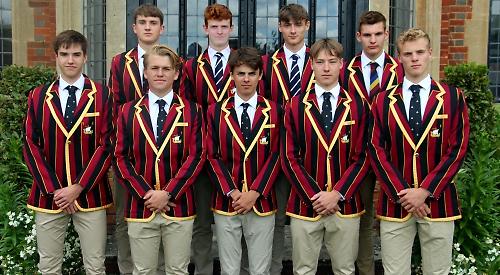 Thrilling scenes in our last race of the day, as Reading Blue Coat School beat Boston High School College, USA to make it to their first ever Thursday of Henley Royal Regatta, with parents and friends cheering them on from the banks. Jubilant Blue Coat cox Cassian Cockings, 17, from Woodlands Road, Shiplake said: "It's awesome, we never thought we'd ever be able to do this.

"We thought they would be quite quick off the start. By the Island we were probably half a length up and just kept making seats. We stuck to our rhythm, we didn't really sprint at the finish, just maintained a rate of 34 to 35 strokes a minute."

Reading won by a distance of two and three quarter lengths in a time of six minutes and 41 seconds.

They're facing Shiplake College in a local derby tomorrow (Thursday).

While racing continues for a little while longer tonight, we're closing our live coverage until tomorrow, when a host of other local crews will join the competition. Join us at www.henleystandard.co.uk from 9am for all the excitement, colour and results from Henley Royal Regatta 2019.

minutes and thirty seconds. The traditional Shiplake roar from the banks was audible as parents, pupils and friends cheered on the home crew in vociferous fashion.

Crew member Sebastian Hjortland-Marks, 17, of Mill Lane, Henley, said: "It's a crazy atmosphere. You get so much free energy from having loads of Shiplake supporters behind us and your mates on the side shouting your name. It's amazing."

Speaking of the win, he added: "We tried to keep our heads really clear. You never know what can happen. The opposition are a good crew, so we had that in our minds. We knew they were going to be fast off the start, as soon as we had our rhythm we kept on moving.

The stroke rate at the quarter mile point was 36 for Shiplake and 40 by Kings. Shiplake rowed steady throughout, while the Kings rate dropped slightly as the race progressed.

Our next local crew taking to the water will be Reading Blue Coat School, at 5.40pm, also in the Princess Elizabeth, taking on Boston College High School, USA. Keep checking this page for the results and reaction.

Kingston were in the lead from the off, steadily increasing the water between them and their opponents and finishing with a verdict of four and three quarter lengths in a time of 6 minutes 45 seconds.

A familiar face of Henley rowing made a long-awaited return to the water at Henley Royal Regatta in this race, with Upper Thames' long-term Director of Rowing Justin Sutherland taking a break from coaching to get back into the thick of things with the B crew.

Speaking afterwards, Mr Sutherland, 53, said: "The start was fantastic. It was a very good start but Kingston are one of the favourite crews to win the event. We knew it would be a big ask, we did ourselves justice. We earned our place by going through the qualifying races. It was surreal and brilliant fun to be on the start again 21 years after I last did that. It's been terrific and an exercise in male bonding!

"The conditions were very, very bouncy. I don't remember it being quite that bouncy. We were in the middle of the river so we were exposed a little bit more to the bouncy water. You forget how difficult conditions are with the pleasure boats washing you down as you pass."

This is our last update before the lunch break, we'll join you this afternoon when our next local crew is Shiplake College, who will be taking to the water at 3.10pm in the Princess Elizabeth Challenge Cup.

There was a clash of oars in the first few seconds of the race as Upper Thames drifted from the Bucks station, garnering an early warning from the umpire. The younger Worcester crew established a clear water lead before the barrier and were able to ease the pace slightly - at the quarter mile point, Upper Thames' stroke rate was 38, Worcester was 36. By the finish Worcester was 23 and Upper Thames was 35. Worcester crossed the line in 7 minutes and 30 seconds with an easy verdict.

Despite the disappointment, the Upper Thames crew were proud to have taken the water in memory of former crew mate Mike Tovell, 46, from Henley. Speaking after the race Upper Thames' Gareth Morris, 47, from Maidenhead said: "It was great to get here, it's a big thing for us. One of the guys in our squad died earlier this year. It was really a mini tribute to him. He was a really good rower.

"We had a bit of a blade clash off the start, we were racing a younger, fitter and more lively unit. They just came off a little bit better from the start. They had the advantage of youth over us. We were rowing in their wash. After, we were able to get into a bit more of a rhythm."

Upper Thames Rowing Club was our first local crew to take to the water today, beating City of Bristol Rowing Club in the Thames Challenge Cup by three quarters of a length in a time of 6 minutes and 34 seconds.

Upper Thames started strong, with their stroke rate peaking at 45 strokes a minute. By the time they'd gone through the first quarter mile, Upper Thames was at 41 with Bristol all out at 39. By the barrier the two crews were rowing at the same rate, which continued throughout most of the race, but that initial burst was enough to push Upper Thames through.

Upper Thames' Mark Jinks, 29, from Clarence Road in Henley, was thrilled with the win. Coming off the water, he said: "We had a really positive start and were a couple of seats up. We managed to get up to about a length and maintain our rhythm and just sat in that the whole way down. We managed to hold our nerve and come away at the end. It's a really positive result."

8am update: WELCOME to this year’s Henley Royal Regatta

A total of 84 races will take place today (Wednesday), starting at 9am, with five- or 10- minute intervals between each.

The final race before the lunchtime interval is in the Thames Challenge Cup at 12.20pm. Racing will then recommence at 2pm.

The tea interval follows the 4.20pm race in the Prince Albert Challenge Cup. Racing will then recommence at 5.30pm.

The Upper Thames Rowing Club A crew will be taking to the water at 9.30am in the Thames Challenge Cup against City of Bristol Rowing Club.

Then at 10.45am Upper Thames are again in action, this time in the Wyfold Challenge Cup, against Worcester Rowing Club.

An hour later, at 11.45am, the Upper Thames B crew take on Kingston Rowing Club A in the Thames Challenge Cup.

Shiplake College take to the water at 3.10pm against King’s School, Chester, in the Princess Elizabeth Challenge Cup.

They take on Boston College, USA, at 5.40pm in the Princess Elizabeth Challenge Cup.

We will be updating with results and reaction and photos of local crews throughout the day, so keep checking this page for everything you need to know about the first day of Henley Royal Regatta 2019.

A record 660 crews entered this year’s royal regatta, which is an increase of almost 100 on the benchmark set in 2018, with about 1,900 athletes and 159 overseas crews representing 17 nations but almost of these headed home after qualifying races on Friday. Only 340 crews are able to compete at the regatta proper due to the tight schedule.

This year’s event also features the mixed military crews of the King’s Cup, the first-ever entry from Saudi Arabia and the return of a number of past champions in several highly-competitive events.

The King’s Cup commemorates the Centenary of the 1919 Royal Henley Peace Regatta. Crews from the original six nations of Australia, Canada, France, New Zealand, the UK and the USA, will be joined by Germany and the Netherlands, to compete in a knock-out format over the final three days.

An extensive international entry sees strong national crews from the Netherlands, New Zealand and China competing head-to-head for many trophies, particularly in the women’s events.