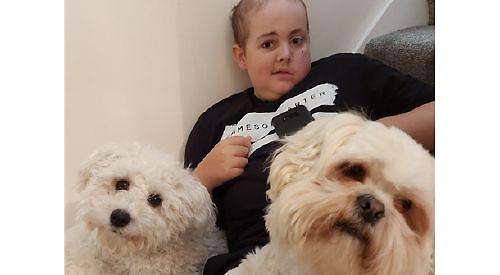 A SECOND dog day care centre set up in memory of a 13-year-old boy who died of cancer has opened.

Charlie’s Dog Place, off Kennylands Road, Sonning Common, is named after Charlie Ilsley, who died in December after losing a long fight against cancer.

Offering day care, dog walking and dog training, it is run by his mother Toni and her daughter Jess.

They opened the first Charlie’s Dog Place in June at the family’s home in Buckingham Drive, Emmer Green, after converting the garage.

Their licence from Reading Borough Council meant they could only look after six dogs at once, so Mrs Ilsley decided to expand and took over the former Doggy Dips in Kidbys Yard and can now look after up to 20 dogs.

Mrs Ilsley said: “At home I could only have six dogs and I already had my own two dogs so I was turning people away left, right and centre. This place came up and I thought it was probably the right time and Charlie would have absolutely loved it.”

It took three weeks to renovate the new building. “It was a lot of work,” said Mrs Ilsley. “To have a dog place we need heating but the building is so old it would have gone out of the window so we needed to add insulation and change the ceiling and we only had the evenings to do it in.

“We were here to 1am most nights. We had a new kitchen put in as well to try to get it up to Charlie’s Place standards.”

She has two new full-time members of staff but they both contracted covid just before the opening.

Mrs Ilsley said: “For the first day I was working with a friend of mine instead and I cried, I laughed and I thought, ‘I don’t want to come back tomorrow’. But when I shut the door at 6pm I was like, ‘I’m so glad I’ve done this.’ This is Charlie’s Place, it’s the only thing I can do for him now. It’s something to do in his memory.”

Charlie, a pupil at Highdown School in Emmer Green, had fought cancer since 2015 when he was diagnosed with a brain tumour and was twice given the all-clear after treatment. He had two dogs, Ernie, a shih tzu bichon frise cross, and Eric, a lhasa apso.

While he was in Mexico for treatment in the week before he died, he and his family stayed at a ranch that had rescued a dog and Charlie told his family that he wanted to work with dogs when he was older. Mrs Ilsley has left her job at Prospect Park Hospital in Tilehurst to run both dog centres full time.

She is a qualified dog trainer and is now taking a three-year online degree course in dog behaviour.

She said: “We haven’t got a routine yet, it’s all a bit up in the air, but we have a van that we take the dogs out in for walks, which is usually two big walks a day.

“Then they come in and play and I’d like to say rest but they don’t really, there’s too much going on.

“We have so many toys, a tunnel, a ball pit and more. It’s a lovely place for dogs. Most people who use the service want to socialise their dogs while some are elderly and can’t walk them. A lot of people are returning to the office now as well so need a dog walker.

“There are not a lot of dog care centres around and people seemed to be pleased with us.”

Meanwhile, Charlie was honoured at the Day of the Dead festival in Mexico last week.

“I got a message asking if I’d be okay with it,” said Mrs Ilsley. “They wanted to put a picture of Charlie on an altar so he could have food. They said Charlie was in all their hearts.”