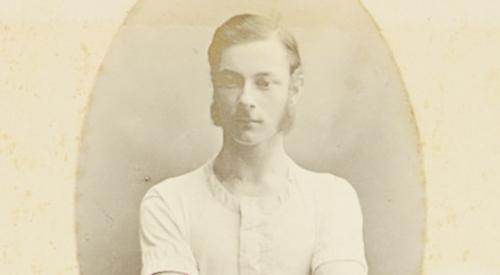 THE story of a previously unknown Leander Club rower who died during the First World War has been revealed by an amateur historian.

Mike Willoughby, from Woodcote, researched the life of Lt Col William Ellison as part of his work to identify and honour all the soldiers with Henley connections to die during the war.

Lt Col Ellison was a doctor who served the royal household before his call-up at the outbreak of the conflict.

He was born in Windsor in 1855 and educated at Eton College.

Lt Col Ellison attended Oxford University, where he continued rowing and was part of the winning 1878 Boat Race crew. He then joined Leander and was in the bow seat when the club’s eight won the Grand Challenge Cup at the royal regatta in 1880.

After graduating in 1884, Lt Col Ellison received medical training at St George’s Hospital in London and served as the hospital’s assistant medical registrar.

In 1888 he was appointed surgeon apothecary to Queen Victoria’s household at Windsor Castle and in 1895 became an MD. During the 1890s he was also acting resident physician to Victoria at Balmoral and consulting physician to Edward VII and George V.

He joined the army and became a major commanding the first volunteer battalion of the Royal Berkshire Regiment. He was promoted to Lieutenant Colonel on November 5, 1915 and served on the Western Front. Lt Col Ellison died of natural causes on November 1, 1917, aged 62. His funeral took place at Eton Cemetery.

Mr Willoughby launched the Lest We Forget project in 2013 which has led to the installation of several memorial plaques honouring hundreds of “forgotten” servicemen from the Great War.

He is also organising an exhibition about all the rowers from Henley or connected to the Thames who died during the conflict.

This will be held the Old Fire Station Gallery in Henley during this year’s Henley Royal Regatta and then at the River & Rowing Museum in November.

Mr Willoughby has so far identified more than 450 soldiers who rowed for clubs and universities, including Henley Rowing Club, and found more than 300 pictures of them.

He said: “What we have tried to do is feature, as far as possible, all the rowers who competed at Henley, rowed on the Thames or for Thames rowing clubs who died in or as a direct result of the war. It has been an education for me because I’m a non-rower.

“The reason I’m doing this is because it’s a Henley-connected thing and, like most of the other things I’ve done, it hasn’t been done before.”

Mr Willoughby researched and wrote about his work in a chapter of The First 200 Years, a book celebrating Leander’s 200th anniversary this year.

Last year, he discovered that another soldier who died in the conflict, Fl Lt Richard Holdsworth, had also rowed for Leander.

Leander spokesman Robert Treharne Jones said: “Ellison’s rowing success reflects a period during the 19th century when Leander had yet to reassert itself as the leading force in British rowing.

“Just a short time later Leander entered the ‘golden years’, when the club notched up a dozen wins in the Grand in just 15 years.

“What I find really extraordinary is Ellison’s appointment as surgeon-
apothecary to the Queen, just four years after qualifying, at the age of 33.”