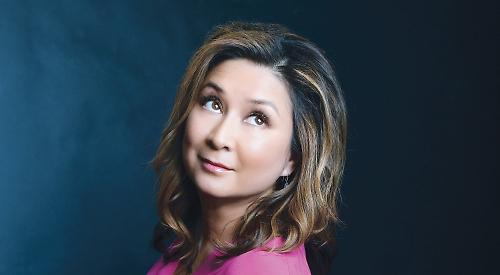 “THE sort of person you’d like to have as your MP” isn’t a bad one as descriptions go. Not many people really fit the bill, but the comedian Ayesha Hazarika is undoubtedly one of them.

The broadcaster, author and journalist, who writes columns for the Evening Standard and Grazia magazine, isn’t currently standing for election anywhere — or planning to — but with the state of British politics being what it is, that could well have changed by the time this paper hits the stands.

Next Sunday (October 7) at 1pm there is a chance to get the former political special adviser’s take on the state of play at the end of the party conference season when she appears on the Henley Literary Festival’s politics panel alongside New Statesman editor Jason Cowley and Spectator assistant editor Isabel Hardman.

As you’d expect from a literary festival, all three have new books out. Cowley’s essays and profiles are published in Reaching for Utopia, while Hardman — who also co-hosts Radio 4’s Week in Westminster — is the author of Why We Get the Wrong Politicians.

For her part, Hazarika is the
co-author with Tom Hamilton of Punch and Judy Politics: An Insider’s Guide to Prime Minister’s Questions.

The pair spent every Wednesday morning for five years preparing Ed Miliband for combat ahead of PMQs, with varying degrees of success. Their book lifts the lid on the bear pit, reveals the tricks of the trade from leading politicians and the people who prepped them, and takes you behind the scenes of some of the biggest PMQs moments in British political history.

By venturing into stand-up, Hazarika could be said to have swapped one kind of bear pit for another — though the Guardian’s John Crace noted that she is “never cruel and manages to create a world I never thought possible” while praising her performance as “extremely funny... sharp and on the money”.

Currently embarked on a UK tour that will see her play five nights at London’s Soho Theatre at the end of October, Hazarika is appearing locally at Norden Farm Centre for the Arts in Maidenhead on Friday, October 12, and at the South Street Arts Centre in Reading on Friday, November 9.

“Girl on Girl — the Fight for Feminism” is the 42-year-old’s second stand-up tour of the UK, following on from her debut “State of the Nation” show last year.

It finds Hazarika asking what happened to feminism. Is it too posh? Too white? When did Germaine Greer become Richard Littlejohn? And what does any of this have to do with Piers Morgan?

As for the “girl on girl” part, it quickly becomes apparent that Hazarika sees today’s feminism as a house divided against itself.

“The context of it is that post-#MeToo we’re in a bit of a situation where I find I often get asked to go on television to have a fight with someone about feminism — and it tends to be another woman,” she says.

We’re living in a bit of a time when women are getting pitched against each other on feminism. And, you know, is that good? I mean, I don’t love fighting other women about feminism, but also there’s quite big questions about what is feminism? What’s the right kind of feminism?

With Brexit continuing to dominate the political agenda more than two years on from 2016’s EU referendum, does Hazarika feel that the concerns of feminists and women’s rights campaigners have been pushed to the margins?

“Well, I think the #MeToo moment was really big — and a very powerful, important moment in sexual politics and gender politics — because for the first time a lot of women felt they could speak out about something quite difficult that had happened to them and I think lots of women had been carrying around big secrets about sexual abuse or harassment for their whole lives, many of them. So that was a very big moment because the veil of secrecy was lifted.

“It also highlighted that often sexual harassment and abuse is not just about sex. It’s about power — it’s about abuse of power. That was a very important moment. But my big concern is that it can’t just be a big moment that we all got very excited about — we had a hashtag campaign on social media. That can’t be the end of it.

“People shout loudly about an issue and that’s very important but you also have to do the work to actually get change, and you do that by focusing on sometimes the less sexy, the less eye-catching stuff — the stuff that really matters and that affects women’s lives.

“So I think my message is, the #MeToo movement was great, very important, a very big moment, but don’t think that it’s all fine and it’s all sorted now — we still have a long way to go. We’ve got to keep fighting for gender equality.”

That’s a different sort of Punch and Judy politics, isn’t it? “I think there’s a place for Punch and Judy politics and I think probably something like Prime Minister’s Questions is it,” reflects Hazarika. “And I think sometimes where the mainstream media is at the moment, this desire to have manufactured conflict for four minutes, people are starting to get tired of it. And it is tired — you don’t learn much, it’s not pleasant to watch, it’s not educational, no one gets to speak, you’re just wound up to shout at each other. I hope that type of television and broadcast is going to have had its day soon.”

With the post-referendum political landscape continuing to be marked by tumult, there has been much talk of a Blairite-style centrist party being formed ahead of the next general election. Having previously worked closely with the likes of Ed Miliband, Harriet Harman, Gordon Brown and Tony Blair himself, does that prospect appeal to Hazarika?

“Well, it’s interesting because this debate is raging at the moment — the idea of a new party or a third party. I was just talking about it this morning with some people.

“A lot of people really like the fact that the Labour Party is a more socialist party than it was, and a lot of Conservatives say to me — Conservative supporters, not necessarily MPs or whatever — they say to me, ‘You know what? We wish the Tories had a version of Jeremy Corbyn.’

“I’m somebody more in the centre ground — I’m still pretty left-wing but I’m probably more to the centre in terms of how I would like politics to be. So I think sometimes us in the bubble in London, we assume that everybody thinks the same way that we do — that’s a really big mistake to make and it’s why we’ve got lots of things wrong in politics and why we miss things like Brexit.

“And I think for quite a lot of people they quite like having clear red water and clear blue water. So they like having quite defined politics again — because a lot of people felt that all the parties are the same, they felt that Labour and the Tories are the same. The Liberal Democrats were in coalition so they just thought the Liberal Democrats were the same as the Conservatives as well.

“I think we’ve had an era of people thinking actually all our politicians are the same, right? Now people are quite enjoying the fact that you know what Jeremy Corbyn stands for. And I don’t think people do know what Theresa May stands for, which I think is why they want a change — they want somebody who’s probably more right-wing than Theresa May.”

Not to suggest that Hazarika comes across like a politician, but would she ever consider standing as an MP herself in future?

“Well, never say never, but I did try many, many years ago. I tried to get selected in Scotland and wasn’t successful back in 2010. And I’m now quite enjoying my new life — I quite enjoy being a political commentator, writing about politics, broadcasting about politics. I almost feel I have a bit more of a say and an opinion than I would do if I was an MP — because I think MPs in both the big parties — and indeed the Liberal Democrats, actually — I think they feel quite frustrated at the moment.”

Tickets for the Henley Literary Festival’s politics panel on Sunday, October 7, are £9. To book, visit www.henleyliteraryfestival.co.uk