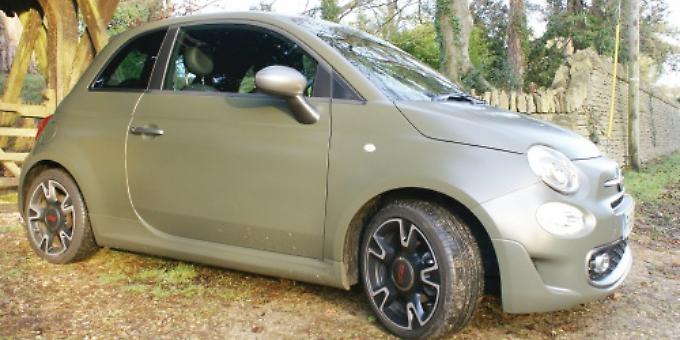 THE fabulous 2018 Fiat 500 has to be one of the only models of car that could be considered a fashion icon.

The genius of its reinvention over the past decade — the car was originally launched in the Fifties — is that it sparkles in its 21st century skin.

It can also be moody and cool as in the test car I have been driving, a green, sporty version, the Fiat 500S. Ultimately, of course, anything iconic is judged by its longevity and there the Fiat 500 scores highly.

But with this car — as with anything that proves overtly popular — there is also a Marmite thing going on.

Some — actually a lot of people as sales have climbed — love the Fiat 500 while it might not quite be to the taste of others: a bit like that ubiquitous savoury spread itself.

But as I mentioned the word fashion in connection with the car, you can style a new Fiat 500 to suit your own idea of colour co-ordination.

So the Fiat 500 is a complete little car on all fronts: looks, performance and style, and of course this makes it as marketable a model in 2018 as it was in the Fifties.

Rolling off the production line at Fiat’s Mirafiori plant in Turin for the first time on July 4, 1957 the car quickly established itself and went on to achieve cult status.

But that’s not all: the car has always had a marvellous little — that word again — engine.

This time in 2018 the test car was fitted with an 875cc petrol TwinAir that produced 105hp, which made it fly on top revs.

It was no accident that the matte paint finish — again not to everyone’s taste but certainly effective — was called Marching Green, which gave the car a subtle militaristic air.

The Fiat 500 — the original city car — celebrated its 60th birthday in 2017. During its first production run, which finally ended in 1975, almost four million 500s were sold internationally. Fiat says “a staggering 400,000” of this first run “can still be found on Italian roads today”.

After two decades in retirement the Fiat 500 was reborn in 21st century guise to critical acclaim and commercial success in 2007.

The following year the Fiat 500 added to its impressive list of trophies, European Car of the Year for 2008. It’s an undisputed global success having sold four million units of the original and two million of the current model, 80 per cent of which are sold outside Italy in more than 100 countries worldwide.

It even picked up Used Small Car of the Year in the Car Dealer Used Car Awards 2016. The Fiat 500S I have been driving is the new sporty version, characterised by its bolder look and full range of standard equipment.

It is available in two versions, saloon and convertible, and Fiat says the 500S is aimed at “young motorists, mainly men, who seek a car with a strong sporty personality”. S version cars have accounted for about 15 per cent of 500 sales in Europe.

The 500S features front and rear bumpers in a sporty design, built-in fog lamps, bespoke spoilers and skirts and details in the exclusive Satin Graphite finish (such as the door and boot door handles, mirror caps and wheel trims).

There are also rear, tinted windows for the saloon model, a chrome exhaust cap, the front black-grained air vents and the honeycomb design under the grille. The 15in wheel rims are also bespoke and decorated with the specific “Stain Graphite” finish.

Additionally, on request, the 16in rims can feature a matte black diamond cut treatment. The exclusive matte Alpi Green shade, which also characterises the 500X S-Design, is only available for the saloon version.

The 0.9 TwinAir 105 HP two-cylinder petrol engine, which aims for low consumption and emissions, maintains performance thanks to its super-charging ability. The 500S is also available with the 1.2 69 HP engine and the 1.3 Multijet turbodiesel 95 HP engine.

The interior of the 500S has “Satin Graphite” details (such as the fascia of the dashboard), sporty steering wheel and the black combination of seats and ceiling, in contrast with the door panels and the edging on the seats, available in light blue, white and yellow.

The enduring message with this car is “go configure”: that is, to get the car to match your style, your colour preferences and your take on 21st century motoring.

Toyota’s Yaris Cross has the best of both worlds

THIS week’s drive is the latest version of the tried-and-tested Toyota Yaris, a badged model sold ... [more]

HYUNDAI, the South Korean carmaker, has come up with a super-smooth electric vehicle (EV) to match ... [more]

ZIPCHARGE, a pioneer in portable energy and EV charging, has announced that more than 10,000 people ... [more]