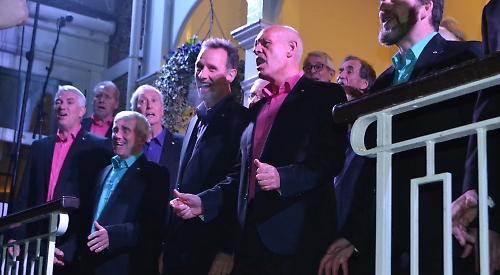 The Thames Valley Chorus sang a mix of Christmas hits and traditional favourites for the fourth night of this year’s Henley Living Advent Calendar.

The ensemble performed to dozens of people from the steps of Leander Club tonight (Tuesday), beginning with folk song Ride the Chariot.

Conducted by deputy director Alex De Bruin, they proceeded ot sing hymn I’ll Fly Away and You Raise Me Up before a version of Billy Joel’s For the Longest Time.

The group then performed several festive song, including the Coventry Carol and a medley of White Christmas and The Secret of Christmas.

They followed that with I Want a Hippopotamus for Christmas, which Mr De Bruin said was “most appropriate for this setting” as Leander’s mascot is a pink hippo.

The event was sponsored by Niki Schafer Interior Design, with Mrs Schafer introducing the act as Living Advent organiser Richard Rodway had a sore throat. She said: “He’s feeling a little hoarse, or should I say a little hippo”.

The night was raising money for the Henley Youth Festival with the traditional raffle after the performance.

Visitors were served mulled wine and mince pies on arrival, while there were also fire pits to keep them warm.

Mr Rodway said: “How great are Thames Valley Chorus? They have performed a couple of times before but the ‘Hippopotamus for Christmas’ was just fantastic.

“I loved the Neil Diamond and Billy Joel renditions. It’s a great venue and the weather has been kind to us.

“It’s a perfect night, we need more people to come along!”

Tomorrow’s (Wednesday’s) performance will take place at Shaun Dickens at the Boathouse in Thames Side.

For a full round-up of the first week of the calendar, with pictures, see this week’s Henley Standard, out on Friday.