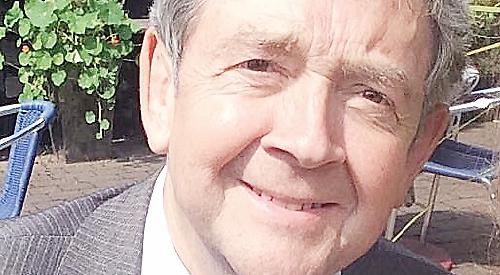 STEVE EDWARDS, businessman and a leading light at Henley Rugby Club, died peacefully at the Sue Ryder hospice in Nettlebed on Thursday, December 15, aged 63. His wife and daughters were at his bedside.

He had been fighting stomach cancer for more than three years.

Born and schooled in Colwyn Bay (and hence a lifelong Evertonian), Steve went to university in Cardiff and made it his home, playing rugby for Cardiff High School old boys.

After a brief stint as a teacher, he moved into the publishing industry where he then spent his entire career.

Steve and his wife Maggie moved to Edinburgh in 1983 where he was deputy managing director of The Scotsman and his daughters, Catrin and Jess, were born.

He played rugby for Corstorphine.

In 1989 the family arrived in Shiplake when Steve became managing director of the Reading Evening Post.

He also began a 27-year involvement with Henley Rugby Club. He joined the veterans’ team, which he captained in 1990/91, and didn’t hang up his boots until he was well past his sell-by date in 1997.

He then turned his active sporting focus to golf, joining Henley Golf Club where he became well-known and well-liked for his wit and repartée both on the course and in the clubhouse, despite his reputation as a scourge of slow play.

At the rugby club he was a vociferous member of The Shed and enjoyed offering advice and constructive criticism from the touchline to referees and touch judges.

He was a very successful fund-raiser, organising the club’s annual golf day at Badgemore Park Golf Club, arranging speakers for its various events and exhibiting his skills as an MC, speaker and auctioneer at many sporting dinners.

Steve also loved golf tours and for the last 25 years enjoyed the regular Henley Hacks trips to France, the US and Switzerland as well as combining golf with supporting the Hawks at their furthest away games.

Stories of Steve on tour are legion but “what goes on tour stays on tour”!

In 2000 he turned his back on the corporate world and bought a small listings magazine business, targeted at the parents of primary school children, and moved the business to Henley.

Over the following 16 years Steve and his dedicated team grew Primary Times through both direct operations and franchises to now have the biggest print run of any “free” magazine in Europe.

By now living in Peppard, he also helped his partner Debbie to establish her business, Flemings, in Sonning Common.

Steve and Debbie were married in June this year.

The immediate reaction to the untimely death of this man for all seasons has shown how much he was loved and how big a void he has left in the lives of his family and his myriad friends.