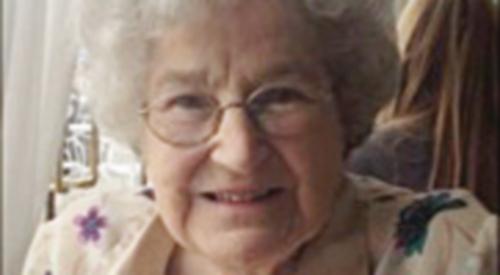 She was one of five children born to Frederick and Mary Strudley.

After attending school in Henley, she acquired her first job as a shorthand typist with World/Walker stores.

June continued to work for the business for 17 years. She followed it to central London when the offices moved but after three months of very early mornings and a tiring commute,  she decided to find a job back in Henley.

June went to work at Stuart Turner in Market Place, where she spent 33 years until her retirement. She made some lifelong friends there and really loved her job.

It was in these years that she met and married Bill and they had their daughter Debbie. June then became stepmother to Bill’s daughter Lynn.

Throughout her life, June was a carer to many. Whether it was her family, neighbours or just an acquaintance, she always went out of her way.

All through her working life and during her retirement, she would deliver newspapers and shopping, collect prescriptions and provide care for the elderly.

She spent the last five years of her life caring for her husband who became housebound after suffering a a stroke. June missed her walks around town and the chats she used to have with people but was completely devoted to caring for Bill, which at times was really hard for her.

June loved Henley — to her, there was no place better in the world with walks by the river and frequent visits to Waitrose.

Lots of local people will remember her for her smile and giggle. She touched so many hearts with her kindness and positivity. She always put others before herself because that’s what made her happy.

June was so contented with her simple life and never wanted for more than what she had, which was very little by today’s standards. She was loved and will be missed by many people in the town.

June is survived by her husband Bill, daughters Debbie and Lynn and grandchildren Craig, Ben, Josh and Sophie. The funeral service will be held at St Mary’s Church on Thursday, August 24 at 1pm.

Flowers are welcome or you can make a donation to the acute stroke unit at the Royal Berkshire Hospital. All enquires to T A Ellement & Son (Tel 0208 886 60324).