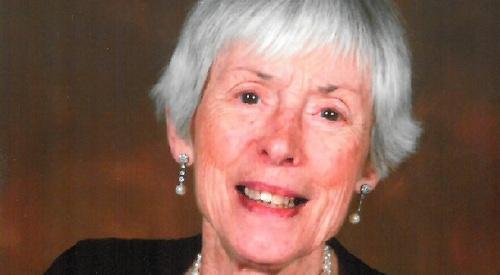 MARY Angela Burge, who witnessed a Second World War bomber crash into the River Thames near Wargrave, has died, aged 89.

She was born in Lower Shiplake, the second child of Arthur James and Marjorie Burge.

Miss Burge enjoyed a very happy childhood, even during the war, and had many adventures.

When she was 14 she witnessed an American Boeing B-17 bomber, known as the Flying Fortress, crash on November 13, 1943.

Nine US servicemen lost their lives in the crash but the bravery of the crew saved many more lives on the ground.

On the day itself, young Mary was alerted by her friend Reg who had heard the explosion and saw the plane in flames and smoke billowing into the air.

A crowd gathered by the river and saw a member of the crew floating downwards with a parachute before disappearing behind some trees. Later, she sketched some drawings of the crash and wrote a diary entry explaining what she had witnessed.

She also discovered that Technical Flight Sergeant Alan Purdy, the radio operator on the plane, had been the only man to survive the crash, having escaped with a sprained ankle.

The rest of the crew, which had been on route to Germany for a bombing mission, had sacrificed their lives by staying on board when they could have bailed out. The pilot steered the plane away from the houses in the village and the entire bomb load was released along the river. He was going to crash land the plane but just after releasing the bombs it blew up in mid-air.

Miss Burge never found out why it crashed but remembered it being very cold and seeing ice on the wings.

Over the years, she visited schools to talk about her experience. She also met the families of the young Americans who lost their lives.

Miss Burge said: “The relatives started coming over and I met them in Wargrave. They were really interested in seeing where I had spotted this burning plane.

“I took one of the men’s sisters to exactly where I had walked that morning. She found it very emotional to see exactly where her brother had died.”

Miss Burge attended St Mary’s School in Henley before moving on to study at Grugeon School. She had six months’ training at the Ecole Hotel in Switzerland before she immigrated to Kenya in 1956.

She worked as a housekeeper at the teacher training school in Nairobi and then helped manage the Whitesands Hotel in Mombasa.

She returned to England in 1963 then went to work in Tenerife as a hotel receptionist before coming back again in 1965 and settling.

She worked at various establishments before retiring to care for her elderly parents, who lived in Milton Close, Henley.

Miss Burge lived in Lower Shiplake for many years but moved to War Memorial Place for the last three months of her life.

She is survived by her brother John, his wife Maureen and their son Christopher.

Her funeral will be held at Sacred Heart Catholic Church in Henley, next Friday (March) 1 at 11am. Donations are being accepted for the Sue Ryder hospice at Nettlebed, care of funeral directors Tomalin & Son on (01491) 573370.