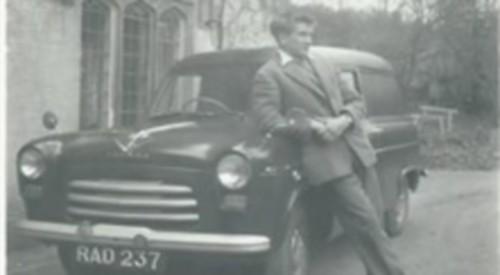 EDWARD Patrick Harding, an entrepreneur, bon viveur and ener- getic member of the Henley community since the early Seventies, passed away peacefully after a long battle with cancer on Sunday, February 14.

Edward was born in Keynsham, Somerset, on February 3, 1937 into a life with a great deal of colour.

His mother, Mildred McGahan, a minor star of musical theatre, shared a stage with the great Harry Houdini. His father, Edward Thomas Yeoman Harding, grace- fully retired from the footlights in order to pursue a career more suited to his talents.

As one of 22 children, Edward snr continued the family business of grocery and butchery, supplying the Bristol retail market and the thenbusy dockyard.

The family also owned and ran a very successful equestrian centre, breeding horses and teaching the gentry to ride.

Following his father’s death, Edward left Belmont Abbey School in Hereford to take over the family business at the age of 16.

However, with the evolution of larger chains of shops, the forerun- ners of today’s supermarkets, the business was limited in what it could achieve.

After a number of years of toil, Edward left the retail sector to work for his brother-in-law, a wealthy racehorse breeder, who had a num- ber of business interests, including a chain of bookmakers’ shops and Lansdown Road Motors, a car deal- ership in Bristol.

It was during this period that he made the acquaintance of Sir Richard Tompkins and became part of the team that created and grew the iconic brand that was Green Shield Stamps.

Over a 17-year career with the company, which brought him and his family to live in Henley, he could only be described as a stratospheric success, driving a huge sales force and dramatic year-on-year growth. The organisation was, however, heavily reliant on a number of very large customers and when Tesco made the first move of many into its own customer loyalty scheme, the writing was on the wall for Green Shield.

Edward and his colleagues spent a long week examining the strategy and came up with the genius plan of reusing the Green Shield supply chain and retail outlets to provide attractive, low-priced goods to the retail market and so Argos was born.

Argos revolutionised the way people bought high value goods and its success is a matter of business history.

Once the transition from the Green Shield stamps brand was complete, however, Edward sought more entrepreneurial variety and exited the business to pursue a num- ber of short-term business turnaround and start-up projects.

He added his customary business magic to each project and was part of the regeneration of a number of well-known names in the construc- tion and fledgling IT sector.

He was a keen owner and racer of cars that would now be considered classics — multiple vintage MGs, Humber, Jowett, Austin, Hillman and even a 1988 Ford 8.

It was in the world of technology, however, that he found his new niche.

Edward created Optichrome Computer Systems, funded by a Woking printing firm, and it was to become one of the pioneers in the then unheard of field of enterprise resource management in bespoke manufacturing. It went on to inspire a whole new sector of IT provision.

Interwoven with his very full and demanding business life, Edward was always at the heart of Henley social enterprise.

Whether it was the Henley Show, the May Fair or charity events, he was always there, building scenery, constructing horse jumps and ferrying seemingly unfeasible amounts of props, tools, laughing children and solutions in his small, car-drawn trailer. He coached a generation of boys, including his son, to play rugby at Henley Rugby Club and gave up pretty much every weekend to help organise tournaments, ferry small boys to matches and, on the odd occasion, embark on bouts as a ter- rible referee.

Woodlands Pony Club also bene- fitted from his boundless energy and both of his daughters became very capable riders and horse owners.

He always had time for his family, or to help a neighbour in need, and he was never short of advice or a solution to the seemingly insoluble challenge.

He leaves behind his wife Brenda (née) Floyd, sister of the late TV chef Keith Floyd, his three children and a fleet of grandchildren who will always benefit from having had his influence in their lives.

The funeral service took place at the West Berkshire Crematorium in Thatcham on Monday.

Donations in memory of Edward to Sue Ryder, Alzheimer’s Research UK or Cancer Research UK may be made via Edward Patrick Harding memorygiving.com