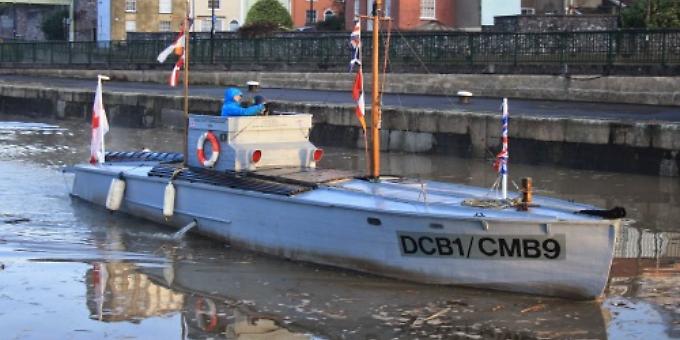 AN experimental boat from the First World War will be one of the big attractions at next weekend’s Thames Traditional Boat Festival.

The event runs from Friday, July 19, to Sunday, July 21, at Fawley Meadows, Henley.

With the weather promising to be a continuation of the gorgeous summer experienced so far, big crowds are expected over the period of the three-day event.

The festival was first held 40 years ago as a rally for like-minded people who wanted to show off their enthusiasm for the older, more traditionally built craft that were fast disappearing from the River Thames.

Since then it has grown to attract interest the world over and is affectionately known as “The Trad”.

Festival co-chairman Lady Judy McAlpine said: “This year’s event will be bigger and better and we have a special treat for visitors. We are delighted to be welcoming back CMB9, the motor torpedo boat which the Admiralty converted to be radio-controlled, with the controller in an aircraft above.

“The CMB9 is believed to be the only craft of its kind remaining from the First World War and is one of only two WWI motor torpedo boats left, so this is quite an attraction for visitors to the festival.”

The Coastal Motor Boat 9 — CMB9 — was built as a motor torpedo boat for the Royal Nay in 1916 and saw action the following year off Zeebrugge.

With CMB1 they were serving on the Dover patrol and went to the rescue of pilots shot down 10 miles off Nieuport, despite coming under attack from four German torpedo boats. CMB9 escaped unscathed but unfortunately CMB1 took a direct hit and was blown up.

Then in September 1917 CMB9 and three more of the existing 40ft craft made up a top secret experiment to become Distance Control Boats (DCBs).

This was to test whether unmanned fast patrol boats with torpedoes could be controlled from the air and directed towards enemy targets.

The CMB9 was re-designated as DCB1 and test runs carried out to become an element of surprise in any attacks on the enemy — controlled from 16,000 feet in the air and five miles away.

The CMB9 won’t be the only big floating attraction at the event. Visitors will see the return of Gloriana, the 92ft long biggest row barge ever built, bedecked in gold and colourful flags.

The barge, which was used for the Jubilee River Pageant of 2012 to mark the Queen’s diamond jubilee, is manned by 18 oarsmen and will be a main target for visitors wishing to get some amazing photographs. They can also take part in a competition to win one of two trips per day up the river and back.

A Victorian steamer which has proved so popular at earlier events will be offering rides up and down the Henley Regatta course and this wonderful vessel is the oldest steam passenger launch still in regular service.

The Heroes of Dunkirk will be sailing across the Channel to the show as part of the fleet of 850 small ships commissioned in the Second World War for the relief of Allied soldiers trapped on the Dunkirk beaches in 1940. They will be led by the L’Orage.

The Bremont Air Display will be showing off their Sopwith Camel, Avro and Fokker triplanes, and replica WW1 veteran aircraft in aerial formation.

Veteran cycles from the Solent Veteran Cycle Club and other groups will be out in force and they will provide an unusual bankside version of the Illuminated Parade which takes place on the Saturday. The night-time river parade sees the traditional boats adorned with imaginative illuminated designs and they will sail slowly past the venue fields and back to provide a shimmering conclusion to the day’s events.

On the Friday and Saturday nights the Crooked Billet pub will have dancing with The Covered, on Friday, and Henley rock’n’roll band Highly Strung on Saturday.

On Sunday there will be a programme of jazz, including Annie and the Doughboys up until the awards ceremony at 5pm, and afterwards internationally acclaimed boogie woogie and blues pianist Ben Waters will bring proceedings to a spectacular finale.

There will be a display of vintage and classic vehicles registered before December 31, 1969, a display of military and amphibious vehicles and scores of exhibitors and traders stands. Last year’s revised plan for this part of the weekend was so successful that it has been improved further and more businesses have entered.

A spokesman for the fesival said: “Boats eligible to take part in The Trad have to be of traditional wooden construction, built in hot or cold moulding techniques, or can be composite crafts with metal frames and timber planking, built of riveted iron or steel, and also those built of canvas on a wooden frame.

“The strict rules mean that any boats built wholly or partly of ferro concrete, fibreglass or plastics are not eligible for the rally. But there is a special interest class for those boats of special historic or constructional interest which are otherwise not eligible to enter.

“The prestigious event now incorporates the traditional values of many other trades and crafts from a bygone era as well as providing a great fun day out for all of the family.

“The patron of the festival is GB Olympic rowing hero Sir Steve Redgrave, who owns a classic slipper launch.

“There are discounts for booking tickets online and admission can be purchased at the gate for each individual day or a three-day ticket.”

For more information and to book, visit www.tradboatfestival.com/festival-tickets

LAWSONS GOLDSMITHS in Henley is excited to announce it has recruited a qualified and dedicated ... [more]

Mill at Sonning’s ‘Angels’ get their reward in earthly realm

A FEW years ago, I launched a Mill Angels scheme that has attracted a small band of wonderful fans ... [more]

AN experimental boat from the First World War will be one of the big attractions at next weekend’s ... [more]