Flat-sharing pointers are ‘out of this world’ 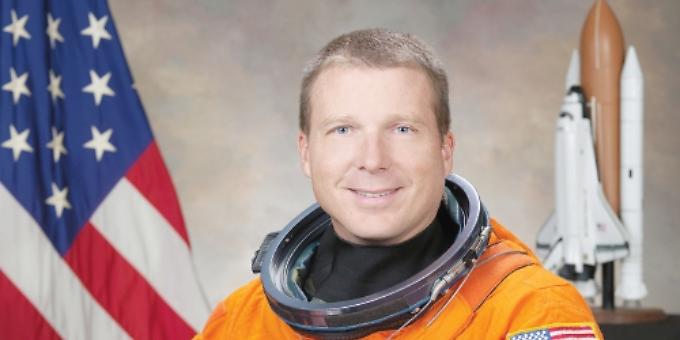 THE International Space Station: a cramped assortment of corridors, labs and claustrophobic crew quarters. But despite the lack of privacy and personal space in space, astronauts live in peace for months on end and get on like a house on fire.

Here on Earth, however, the harmony in a typical flatshare can be easily unsettled — often triggered by toilet paper, dirty dishes, loud music and milk theft.

So in a bid to help Earth’s flatmates achieve the kind of shared living serenity that comes so easily to astronauts, leading flatshare site SpareRoom has appointed former NASA astronaut and ISS commander Terry Virts to the unique role of “House Share Goodwill Ambassador”.

In his new role, Terry, 50, will draw on his NASA training, extensive experience of living with others in space for seven months, and knowledge of astronaut psychology to help British flatmates avoid everyday flatshare conflict and live together in peace and harmony.

SpareRoom turned to one of NASA’s former top astronauts after research highlighted some of the key conflict zones in shared homes across the UK.

Research carried out by SpareRoom revealed a quarter (25 per cent) of flatsharers have had a
bust-up over toilet paper (or a lack thereof), while a whopping 69 per cent have seen red after their flatmate hasn’t cleaned up after cooking, and over a third (38 per cent) have fallen out over accusations of stealing food and drink belonging to other flatmates.

What’s more, one in 10 (11 per cent) fall out on a regular basis and 37 per cent have gone as far as actually moving out of their flatshare as a result of everyday cohabiting conflicts.

Terry Virts said: “The ISS cost over £100 billion and is arguably one of the most important shared living spaces for the human race. So you can see why space agencies spend so much time and money ensuring their astronauts have the right personality traits and training to all get along in space.

“Because, let’s face it, it’s not so easy for them to just move out when they’re orbiting 250 miles above the Earth! But astronauts are still people — which means conflict will happen sometimes — so knowing how to relate to others and deal with stress is a valuable skill that can make a big difference.

“While the stakes might be higher on a space station than in an apartment, the psychology and training used to ensure astronauts don’t get into arguments can be easily adapted and applied to flatmates. I hope that by passing on some of what I’ve learned from my time in space I can help flatmates across the planet live together in peace and harmony.”

Terry’s top tips for helping flatmates get along are as follows:

As great as it is to spend time with each other, make sure you give yourself and others some room to breathe now and then. NASA taught us that mentally stimulating tasks like playing a game or reading a book were a good way of having some solo downtime, so give it a go!

2. Help out around the house and do your share

Astronauts are just like the rest of us when it comes to chores, they aren’t fun, but they have to be done! When I was in space we stuck to a strict schedule and cleaned the International Space Station for two to four hours every Saturday morning — it’s actually kept cleaner than a lot of places on Earth.

3. Don’t take someone else’s food or drink without asking

You should always get permission first and make sure you replace anything you borrow. Form good habits and respect boundaries and all will be well.

4. Talk to one another

Before heading into space for a long duration, we were taught that crew members had to be open with one another and always willing to talk about any feelings of tension or stress. The notion of getting everything out in the open applies to a flatshare just as much as it does a space station. If something is bothering you, make sure you talk about it rather than simmering in silence, or worse, leaving passive aggressive notes for your flatmates to find.

5. Replace the toilet paper when it runs out

This is such a quick and easy thing to do in a flatshare and can prevent conflict. While on the subject of the bathroom, be mindful of how much time you spend in the shower and be aware of who is in the queue behind you.