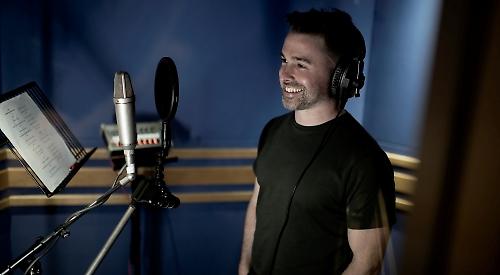 THE son of a former England rugby international and TV commentator has released a single about his father’s fight with dementia.

Charlie Starmer-Smith wrote Spotlight during the coronavirus lockdown last winter when his only contact with his father Nigel was through a window at the nursing home near Oxford where he is being cared for.

He was encouraged to enter the song in a BBC Radio 5 Live competition by his mother Ros before she died from cancer in July.

Mr Starmer-Smith then recorded an album at the famous Abbey Road studios in London.

Spotlight is the first single from it and was released on Friday in aid of the Alzheimer’s Society.

It was played at half-time during the game between the Barbarians and Samoa at Twickenham on Saturday.

Mr Starmer-Smith snr, who lived in Skirmett, played professionally as a scrum half for Harlequins in the Sixties and won seven caps for England. He then became a journalist and television rugby commentator.

Now aged 76, he is experiencing the advanced stages of dementia.

His son said: “I was asked by my mother to send the song into a competition about lockdown music. I was reluctant not only because the music was a hobby I’d picked up again during lockdown but also because it was a very personal song, which I had recorded on some basic equipment in my spare room. I had never for a moment thought about anyone else hearing it, let alone it being played on air.

“However, after my mum badgered me almost on a daily basis, I reluctantly sent it in.

“To my surprise, the radio producer came back to say they’d love to play it and talk to me about my dad and his struggles with dementia.

“I went on the show the following week and had some really positive messages. Few people, it seems, are left untouched by this disease.”

An award-winning producer had been listening to the programme and made contact with Mr Starmer-Smith before inviting him into the studio to record the album, which is currently untitled.

Mr Starmer-Smith, who has worked in the media and travel industry for more than 20 years, said: “Sadly, not long after, Mum passed away but not before I had a chance to play her the album, which was very emotional for both of us.

“So even if the music comes to nothing, it has been a bright spark during a pretty dark time. I am giving any proceeds from the single to the Alzheimer’s Society, which is doing some fantastic research into possible links between sport and dementia.

“I am dedicating the song to Dad but also to all those who have suffered directly and indirectly from dementia. Spotlight, as the name suggests, aims to shine a light on this terrible disease.”

Mr Starmer-Smith has been visiting his father at the care home weekly for about four years and says it is “heartbreaking” to see his deterioration.

He said: “Every time I walk through the gates you are reminded this isn’t the man you knew and the vibrant guy you grew up with but you have to try to take the positives. Dad took the positives out of life all the way through and if I can be here and provide a bit of comfort and remind him of the good times we shared, then it means a lot to me.”

His visits became tougher still during the lockdowns as restrictions meant they couldn’t be in close contact but now he is able to take his father on walks in a wheelchair.

Mr Starmer-Smith said: “Getting Dad outside is a blessing. We had 19 months of looking at him through a window and I think the human touch, holding his hand, they’re the things that he responds to.

“It is very difficult now for Dad. He struggles to swallow and to eat and you see him losing weight on a weekly basis. That’s the cruellest thing about dementia — you see someone you love gradually slipping away.”

After retiring from playing, Mr Starmer-Smith snr moved into commentating, working for the BBC and presenting Rugby Special for 15 years. He also commentated on hockey at the 1988 Olympics in South Korea.

In 2003 he covered England’s victorious World Cup campaign for ITV and then commentated on sevens tournaments across the world for Sky. He has also owned and edited Rugby World magazine.

His son said he would take great care in preparing for matches that he was to commentate on, so his family noticed immediately the first signs of his illness.

Mr Starmer-Smith said: “He was commentating on a match when I suddenly noticed that he was getting words the wrong way round or sentences jumbled up.

“No one else must have noticed it but having heard my dad from the age of three doing commentaries, I knew he didn’t make those kinds of mistakes.

“That was in the spring of 2015 and by the autumn Dad was unable to string a sentence together.”

Mr Starmer-Smith, who lost his older sister to a rare blood disorder when she was 16 and then his younger brother to non-Hodgkin’s T-Cell lymphoma at 19, said his father played in an era long before the risk and dangers of head injuries were taken as seriously as they are now.

He said: “Dad certainly played in the era of the magic sponge — you get knocked out and that’s a badge of honour and back on the pitch you go.”

His father’s brother, who didn’t play rugby, also suffered from dementia before his death.

Mr Starmer-Smith said: “On a personal level, the song means I have said things to Dad that I probably wouldn’t have been able to say otherwise, which I think is important.

“On a wider level, I think the meaning is that surely there must be something in this day and age with scientific development that we can do to make things easier for people with dementia, if not find a cure, because it’s tough.

“I hope this song can help raise awareness of this issue and that dementia is a big issue in sport.

“I am not going to profess to have all the answers as to what the connections are but clearly there is something that needs to be investigated, particularly in contact sports.

“With my brother and sister dying when I was young, Dad is all I have left and it has made me even more determined to do something positive.

“If I can do my small bit through a song it would be amazing and a great, positive legacy.”