Businessmen give their sons' football teams a fresh look 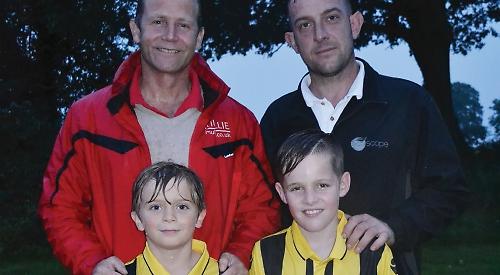 TWO businessmen have paid for new kit for their sons’ football club.

Thirty-two boys were presented with their shirts at Bishopswood recreation ground, off Gallowstree Road, where the club is based.

Among them were Mr Lynch’s son Kaiden and Mr Davies’s son Jimbo, both nine.

Mr Lynch, from Stoke Row, provided sponsorship through his businesses, Ecoscape and Bespoke Driveways. Mr Davies, from Goring, is the founder of Twyford-based estate agent Mullie.

Mr Lynch said: “I always try to support the club and believe in the benefits sport has for the boys. We’re very pleased with how the kit looks and we are planning to take the old kits to Gambia to donate to the children there.”

Mr Davies said: “I’ve had two sons play for the club and other parents have done so much to help the club work that this was the least I could do.”

Dan Staples, who is one of the boys’ team coaches, thanked the fathers for the money, adding: “It gives us one less thing to worry about and means we can concentrate on the boys playing football.

“The shirts look very smart and professional. The boys were excited about it and they had a chance to have their names put on the back.”

Treasurer Paul Collier said: “The club is here for the children and the sponsorship helps lower the costs for the club.”

The club has been fund-raising for two new sets of goals after theirs were damaged in a vandalism attack in August.  Mr Collier has raised more than £1,000 in donations for a new set of nine-a-side and 11-a-side goals and hopes to apply to the Football Association’s goals fund for more funding.

The club is also drawing up plans for a new clubhouse, which could cost more than £500,000.

Mr Collier said he was preparing a bid for funding from Sports England, the FA, the Premier League and local councils.

“We want to get a new clubhouse built in the next five years,” he said.

“We’ve already got £8,000 from club funds and we are preparing to apply for grants.

“There is a lot of energy in the club and we are committed to seeing it grow.”

⚫ The club is to hold a bingo night at Peppard War Memorial Hall, in Gallowstree Road, on November 25 at 6pm to raise funds.