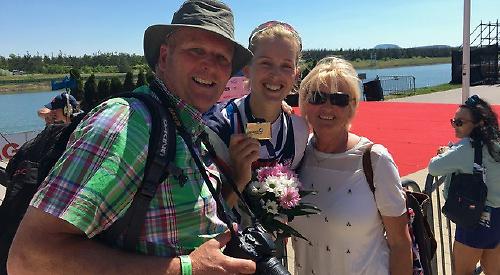 ROWER Vicky Thornley says she is disappointed but not surprised her parents won’t be able to join her at this year’s Olympics in Tokyo.

The Games were postponed in March last year for the first time in the event’s history, but are set to go ahead without international spectators from July 23.

Thornley, 33, who won silver at the Rio 2016 Olympics, is training for the single scull at Redgrave Pinsent Rowing Lake in Caversham as she waits for the GB squad to be announced.

She was hoping her parents, Andrew and Gina, would be there to cheer her on, but accepts it was always unlikely this would be the case.

Thornley said: “I kind of expected it and at no point did I have my hopes pinned on it happening, so it wasn’t much of a surprise. In terms of what’s happened over the last year or so, the priority is just to be able to go out there and race and put in a big performance.

“It would be lovely to have your loved ones there. My mum and dad are my biggest fans and have given me such amazing support my whole life. They’ve pretty much been to every regatta I’ve raced at and travelled all over the world to watch me.

“The British support is always the loudest at the Olympics and we are always well supported. It is going to feel different, but this won’t be a normal Olympics anyway, so it is just another thing that is different.

“I have been fortunate enough to share the Rio Olympics with them. A great part of winning that medal was them being there and being able to share that joy with them, after all of the hard work and tears along the way.”

Thornley, a former Leander Club captain who lives in Bix, broke her elbow after falling off her bike in May. After having surgery, she was back on the water by August.

In the same month, she married Ric Egington, who won a silver medal in the GB eight in Beijing in 2008. The couple were married at Leander Club after their plans to tie the knot in Provence were
cancelled.

Thornley said: “By the time we hit lockdown in the UK last year, I was getting ready for them to postpone it and it didn’t come as a shock. By March we had our team selected, but we were then locked in our houses.

“Training is going well now. I’ve been working hard to try and do better than I did in Rio and I’m going to go out there and give my best performance.”

Her parents, who live in Cheshire, had booked their flights to Japan through Team GB and reserved hotel places, but not put down any deposits.

Mrs Thornley said: “It is very sad that we are going to miss it, but we are just glad to see the Olympics going ahead for the sake of all the athletes who’ve trained so hard.

“In all the years Vicky has been rowing, we’ve only missed four world cups and competitions, so it is sad we can’t be there to support her, but we will do that from home. We always stick together and make the loudest noise.

“It is just the way it’s got to be. We had prepared ourselves for it and we just hope they do very well.”

Mark Banks, chief coach at Leander Club, said: “With a sport like rowing, the pinnacle is the Olympics and having family and friends there is absolutely a given. They want to reward their support network for all of the hard years that went into making the games.

“As much as the athletes want their family and friends there, they get it. I just think it is brilliant that the games are going ahead, because the athletes have suffered so much in the last 18 months. I’m desperately pleased for them.”