Swans have edge as U11 sides shine under lights 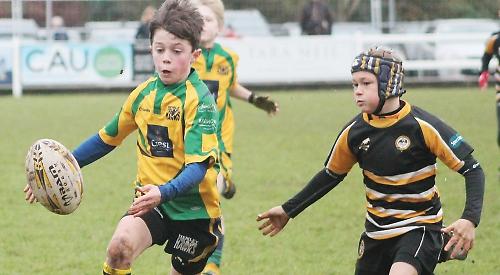 A SQUAD of 11 Henley Hawks U11s had a pre-Christmas treat when they provided the pre-match entertainment ahead of the Hawks versus Chinnor National Division 2 South clash on the Saturday before Christmas.

Taking on local rivals Marlow Swans, one of the strongest U11s teams on the circuit, the next generation of Hawks players got to play 30 minutes of rugby on the first team pitch doing 20 minutes before the main game and ten minutes at half-time in front of a festive crowd of more than 900 spectators. The Hawks started well controlling most of the possession in the opening 10 minutes with Oscar Thomas, Artie Shrimpton, Tom Smith and Jonny Noctor working tirelessly at the breakdown to build the platform for Ollie Johnson at scrum-half to release the backs to showcase their running game.

A neat kick over the top from Will Corbett saw Sam Winters collect and nearly break the deadlock only to be bundled into touch a yard short by the impressive covering Marlow fullback, Finn Keylock.

A raft of substitutions from Marlow saw the momentum of the game shift with the Swans camped on the Hawks’ line but like the hosts they were unable to turn the pressure into points and fearless defending from the Hawks and try saving tackles by Jake Williams and Charlie Ashford meant that the teams went in 0-0 at the break.

The teams returned at half-time of the main game under the floodlights in front of the large crowd.

A lapse of concentration by the Hawks from the kick off saw Marlow win back possession and Jake Rogers pounced and waltzed through three Hawks players to score and break the deadlock only a minute into the second half.

The Hawks regained their composure, but couldn’t break the Marlow defensive line led ably by Billy Ray and Archie Wild, and were never able to fully display their true running game on what was a physical encounter with great periods of the game played up front amongst the forwards. The game finished with a narrow 1-0 win to the visitors.

Henley Hawks U11s train alongside all the other mini age groups (U6 to U13) down at Dry Leas between 10am to midday every Sunday and new players are welcome. For further details contact George Winters or Katie Williams at henleyhawksu11@gmail.com