Honours even as hosts maintain unbeaten in title win 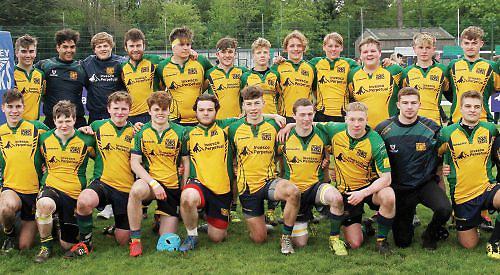 HENLEY Hawks Colts drew against Newbury at Dry Leas to emerge unbeaten in the Oxfordshire, Berkshire and Buckinghamshire League.

It was the second memorable achievement for a talented group of players who last year won the RFU National U17 Shield through defeating Bromsgrove in the final at the Worcester Warriors Sixways Stadium.

Credit is due to the Henley coaches, Mark Venner and Jerry Edwards, who have not only guided the side through two successful years but have built a squad of depth which augurs well for the future of Henley rugby.

In the course of a titanic struggle on Sunday there was no score in the first half until the stroke of half-time when Newbury eventually broke through the seemingly impregnable Henley defence to lead 7-0 at the interval. It had been an even session with Will Thomsett and Henry MacLeod anchoring Henley’s impressive scrum whilst Tom Grenfell and Ed Houghton combined well to ensure there was a supply of good line-out ball.

Henley had their chances with Henry Heath, Ben Stacey and Will Properjohn making incisive breaks but they were unable to finish off the movements.

In a tense second half, Henley established territorial advantage and time and again had Newbury’s try-line at their mercy – on one occasion Alex O’Brien crossed the line but the referee disallowed the try.

Eventually, Tom Priestley breached Newbury’s defence and with his try subsequently converted by Matt Dalrymple, the scores were even.

There was some enthralling rugby as Ben Venner and Jamie Winch frequently switched direction and Will Parton and Callum Brady made regular incursions into the backline in the hope of creating an overlap.

Powerful support was received at various stages from strong running Henley forwards, James Rhodes, Ivor Langley and Scott Carey but Newbury were up to the challenge and absorbed the pressure.

The visitors were able to counter-attack to good effect and it often required heroic defence from Henley to keep them out, notably the fine cover tackles of Harry Wray and Adam Porter.