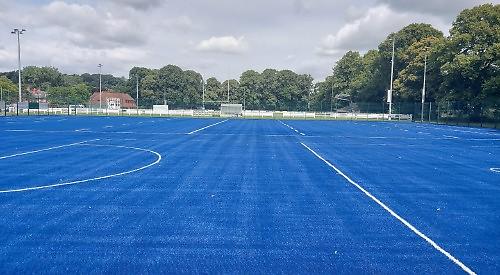 JUNIOR members of Henley Rugby Club had the first use of its new 4G training pitch.

The state-of-the-art facility at Dry Leas, the home of the Henley Hawks, cost £150,000 and replaces an older pitch which no longer met modern standards.

It is being sponsored by investment company Invesco as part of a 10-year deal. Additional funding came from South Oxfordshire District Council, which provided a grant of £37,500.

The club also received donations from members and it organised a raffle to help raise the rest of the funds.

The pitch was installed by A S Sports Systems, a Nottinghamshire-based company specialising in synthetic sports facilities. It will also be suitable for five-a-side football, netball and hockey.

Chris Nixon, chairman of Henley Rugby Club, said: “We are certainly very proud of it. The facility is multi-functional and it is not only for rugby. We are also part of the new launch of RugbyX, which is a new sport coming later this year, and we are the first court for RugbyX.

“We have gone with a blue theme, which is a little unusual. It is the first training facility for any club in the UK that is blue, so we are quite chuffed about that. We have opted for that colour because Invesco’s main logo is blue and we have supported our sponsor.

“Some of our junior section will get to use it first and we have already had enquiries from schools and football clubs that want to use it over the summer.”

The old training pitch, which was 18 years old, was due to undergo assessment for accreditation this summer to confirm its suitability for future use.

However, the club was told the surface would probably not pass the evaluation and would need to invest money in a replacement. Alistair Beynon, the club’s commercial manager, added: “Work started in the middle of June. It is a slow process because you have to remove the old turf and there are several layers that need to come up.

“This is a state-of-the-art facility that you would find on several Premiership rugby pitches and training facilities across the country. It really puts us on the map in terms of what we can offer. In the autumn, we will launch the Henley Hawks netball side and they will use it as their home pitch.”

Henley had their 2019/20 season brought to an early conclusion due to the coronavirus pandemic.