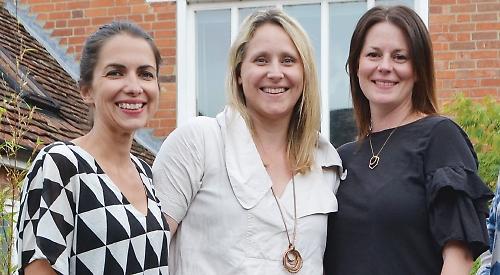 ALMOST 30 women from the Henley area have been nominated for this year’s Sue Ryder Women of Achievement Awards.

They make up around half of the total number of individuals and teams from across Berkshire, Buckinghamshire and Oxfordshire to be nominated.

The awards, now in their 13th year, celebrate the achievements of women in seven categories, business, community service, sport, courage, innovation, mentoring and public service. The nominees are:

THE founder of vintage-themed catering company Time for Tea, which provides teas, buffets and vintage china hire for events across the South-East, including the Thames Traditional Boat Festival in Henley, the Henley Show and Woodcote Rally as well as Hobbs of Henley’s cruises.

Miss Cavanagh, from Harpsden, launched the business in 2014 when she was working at florists White Gdn in Hart Street, Henley. She quit her job the following year and is now based at a unit on the Fawley Hill estate.

In 2017 she won two regional awards and also does lots of charity work, donating some of the profits from events.

FOUNDER of Mr Hobbs Gin, the first gin to be produced in Henley, along with her husband Jonathan.

The couple, from Stoke Row, launched the brand in 2017 and have since partnered with other local businesses, including Gorvett & Stone to create a gin-filled chocolate. They also run Hobbs of Henley boat hire company and now offer gin cruises.

She specialises in French, English and Middle Eastern cuisine and caters for dinner and lunch parties, weddings and buffets.

She was previously a cook at Bourne End Sailing Club.

Her customers include Theresa May, who has worn Mrs Felix’s designs for official state visits and public ceremonies.

Mrs Felix, who opened the store in 2014, is also a mother-of-four, a member of the Henley Business Partnership and a volunteer first responder in Reading.

THE manager of the Christ Church Centre in Henley for the last seven years, which hosts groups including Alcoholics Anonymous, the Henley Symphony Orchestra and the Henley Stroke Club.

THE former manager of the
Henley 60+ Club, Mrs Butt has raised more than £40,000 for the Royal British Legion in 23 years.

Mrs Butt, who lives in Henley, holds a dinner dance each year and dresses in Army uniform to sell poppies in aid of the Royal British Legion. She also collects donations for the annual Henley summer fireworks display.

A MEMBER of the parents’ association at Nettlebed for the last five years, Mrs Chapman has helped organise dozens of events to raise funds for the school.

These include fairs, school clean-up sessions and a “colour run” in 2017, where entrants wore white clothes and were squirted with coloured dye as they ran around the route.

The proceeds go towards equipment and trips for pupils.

A FUND-RAISER for the Sports Association of Nettlebed, Mrs Butler organises annual events including the village fete, Party on the Rec and the Nettlebed Christmas fair.

The money raised goes towards maintenance of the cricket pitch.

HAS run charity events in Henley for more than 35 years, including the annual shop window display competition twice a year and the Regatta for the Disabled.

She started the Henley Partnership and has volunteered to collect money at the Henley Living Advent Calendar each year since it was launched in 2011, despite battling repeated illness.

Mrs Molyneux, who lives in the town, combines fund-raising with her work as managing director of Delegate Office and Conference Services, which she founded more than 20 years ago.

THE chairwoman of Henley YMCA since 2009, Mrs Duckett helps dozens of young people in the town.

She lives in Henley and previously worked with schoolchildren with learning difficulties before becoming a justice of the peace.

Mrs Duckett is also a member of local organisations including the Royal British Legion and the NSPCC and is secretary of the St Nicholas Church parochial
council.

Mrs Borgeuad, who has two young children, was formerly an education consultant and lectures at the University of Reading.

FOUNDER of the Facebook page “Helping Hand-Caversham/
Reading”, which co-ordinates help, including food packages for local families that are struggling financially.

The page began in 2016 and asks residents to donate items for packages, which Mrs Antunes often makes and delivers herself.

AS organiser of the annual “Bunty Ball” Ms Phillips, from Henley, has raised thousands of pounds for charity. Last year she made almost £6,000 for the Samaritans.

Her most recent endeavour is “Brew with A View”, a pop-up tea party for people battling loneliness, while she also wants to encourage businesses to donate and allow benches on their land to create meeting points.

THE squad is one of the best-performing in the country, sweeping the board at all major head meetings and regattas last year and setting course records at several age groups.

They also qualified two crews for Henley Royal Regatta, had six girls represent Team GB at the junior world rowing championships and sent the only female junior sculler to represent Britain at the Youth Olympics in Buenos Aires. All the squad’s coaching staff are volunteers.

THE netball team was formed in 2016 and in their first season, in the Maidenhead District Netball League, the team finished top of their division, losing just one match.

They were then fast-tracked up two divisions to Division 3 and finished the following season as champions, losing only twice.

This year, the team is top of both Division 2 and the Reading District Netball League.

Jasmine, who lives in Rotherfield Greys, was partnered by American Taylor Cataldi and beat Alicia Dudeney and Grace Emma Eland 6-3, 6-2 in the Malahide under-18s doubles final in Dublin.

She started playing tennis aged six and has won more than 30 singles and doubles matches in her career to date.

SHE was a 23-year-old student when she was caught up in the Bishopsgate bombing, an IRA terrorist attack which killed one man in London in 1993.

Now living in Cookley Green, near Nettlebed, with her children Poppy and Felix, she says she is still not over the trauma of the attack.

Ms Bishop is studying fine art part-time at Northampton University and returned to Bishopsgate on the 25th anniversary of the attack last year to present a video art project she had made.

THE Henley girl, 11, is battling leukaemia and turned to decorating and hiding rocks to cheer up others.

Caitlin, who was diagnosed with acute lymphoblastic leukaemia in September 2017, came up with the idea after seeing others doing it online. She has more than 2,000 followers on her “Caitlin Rocks” Facebook page and encourages others to rehide or make their own rocks. Some of her designs have now reached countries including Mexico and Egypt.

HAVING overcome hardship in her life, including the loss of both parents while in her twenties, she founded luxury nightwear business Siân Esther — her first and middle names.

Mrs Adkins, of Henley, shares one-fifth of her profits with three charities: the Luminary Bakery, which employs women who have been victims of crime, poverty, homelessness or domestic violence; Mercy UK, a Christian charity for women struggling with mental health problems and the Marylebone Project, a women’s homeless shelter.

SHE built an eco-friendly home in Henley called the Healthy House, which is chemical-free and made of natural and recycled materials.

The concept home runs on solar power and also has a charging point for an electric car.

Mrs Sherriff, who lives in Medmenham, used local builders and craftsmen for the project and is now writing a book to encourage others to follow her lead.

AN environmental campaigner, she has run schemes in Henley to cut down on the amount of plastic used and thrown away.

Mrs Carey, who lives in the town with her husband and three children, spearheaded an exhibition on plastic waste at the River & Rowing Museum, runs the “Henley Plastic Reduction” Facebook group and also co-founded the Refill campaign, which encourages local cafés and restaurants to allow people to fill their water bottles for free.

A FORMER magazine journalist and Henley dog grooming shop owner, Ms Weatherburn runs her own communications business. After spending 10 years in London working for OK! magazine, she moved to Henley in 2009 and opened Naughty Mutt Nice in Reading Road. She sold the business in 2017 to start her new venture.

AN interior designer with a focus on upcycling. She encourages others to reuse and repurpose furniture and belongings rather than throwing them away and has campaigned for a ban on single use plastic.

Her upcycled designs helped her win interior designer of the year at Grand Designs Live and her work has appeared on TV shows and in magazines.

She also founded Warriors on Waste, classes to teach children to reuse and recycle and the importance of protecting the planet, which she runs as holiday camps and after-school clubs.

Mentor (sponsored by The Ironing Lady)

THE networking group for individuals and small businesses in Henley is run by Joey McGinn, Sarah Gilbert and Nicola Nott.

Founded in 2017, the group runs talks and workshops and helped set up an online shop for members to promote and sell goods.

The women now run pop-up shops in Henley and host coffee meetings to encourage people to get together and share ideas.

IN 2011, she set up the Back to Netball group in Nettlebed after noticing a lack of women’s sport in the area.

The group trains every Monday evening at Nettlebed Community School and has players aged 18 to 55. Some of the players formed the successful Nettlebed Stingers team.

Ms Porter has also organised three mixed charity netball tournaments, which raised hundreds of pounds for the Sue Ryder hospice in the village, Elliott’s Army and the Ollie Young Foundation.

THE chairwoman of Henley Women’s Regatta, she has helped the event become one of the stand-outs in the women’s rowing calendar, attracting almost 2,000 athletes from around the world.

One of the first female rowers to win an Olympic medal for Great Britain, she is also president of Henley Rowing Club and a coach of the women’s junior squad.

Mrs Luke is one of a handful of female stewards at Henley Royal Regatta and undertakes all her work as a volunteer to help inspire young female rowers.

A LIFE and business coach from Emmer Green, Mrs Mountain supports men and women of all ages to embrace change.

She helps clients with problems such as managing fears, launching a new business and believing in their own abilities.

Mrs Mountain has also run drop-in sessions for those struggling or looking for advice.

SHE founded SpringBox Gymnastics in Henley almost 30 years ago and has helped hundreds of children get into the sport.

The club now has about 300 members and takes youngsters from recreational classes up to competition, while Mrs Sweetman has also mentored and supported coaches through professional British Gymnastics qualification.

This year she will celebrate her 60th birthday and the club’s 30th anniversary.

• The other nominees are counsellor Jane Ellingworth and the Oxford Belles acappella group.