Bond director’s charity gig is for your ears only 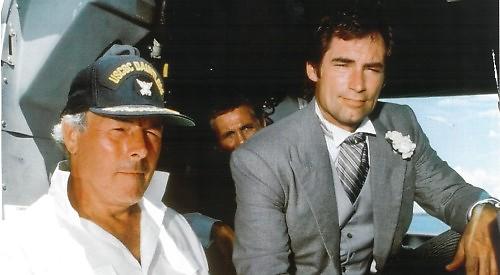 IT was a scene that had the entire cinema audience on its feet and cheering — including the heir to the throne.

The year was 1977 and Prince Charles was attending a screening of the new James Bond film, The Spy Who Loved Me, starring Roger Moore in his third outing as 007.

The film opens with Bond skiing off-piste in Austria. As he slaloms down the snowy mountainside, a squad of four black-clad Soviet agents gives pursuit.

Bond kills one using his ski pole as a weapon but is forced to evade the others by jumping off a sheer cliff, seemingly to certain death.

The audience watches breathless as he plunges through the icy air, only for his backpack to suddenly burst open — unfurling into a colourful Union Jack parachute.

Movie executive Charles Juroe was among those present that evening. He said: “I have never seen a reaction in the cinema as there was that night. You couldn’t help it. You could not help but stand up. Even Prince Charles stood up.”

The Spy Who Loved Me was directed by Lewis Gilbert, but the celebrated pre-title sequence was the work of the second unit director, John Glen.

Glen, who also edited the film, later went on to direct all five Bonds made in the Eighties — For Your Eyes Only, Octopussy, A View to a Kill, The Living Daylights and Licence to Kill, the latter two starring Timothy Dalton.

He had previously directed the second unit on 1969’s On Her Majesty’s Secret Service, but it was his work on The Spy Who Loved Me that most impressed Bond producer Cubby Broccoli.

“It was Cubby’s favourite scene,” says John, who recently moved to Henley with his wife Janine. “It was one of two favourite scenes he had — the other one was where Sean Connery is on the bench with Goldfinger looking on and they’ve got the laser that’s going to cut him in half. Connery says ‘You expect me to talk?’ and Goldfinger says ‘No, Mr Bond, I expect you to die.’”

Back to The Spy Who Loved Me. It turns out that the parachute scene was shot in Baffin Island in Canada’s Northwest Territories, while the ski pursuit was filmed in St Moritz, Switzerland.

“It was June,” says John of the Canadian shoot. “Their summer, so about as warm as it gets, and there’s a mountain there with a 7,500ft precipice and this crazy skier [Rick Sylvester] reckoned he could ski off it with a parachute.

“We went out on a recce and found this place after a great deal of difficulty — and it was quite a difficult scene to do because we were just basically doing the one shot, which was him skiing off this huge mountain.

“I had quite a small unit — two helicopters and I suppose about 14 people — and it took me about three weeks to get the shot.

“Fortunately they didn’t have any telephones in Pangnirtung, so I escaped all the messages coming from Pinewood saying why aren’t you coming back, why is it taking so long? All those sort of pressures.

“And then the rest of the scene — it was fantastic, actually. When I got back to Pinewood with this shot it was so successful and Roger Moore came in and he loved it.

“The studio heads came down and looked at the film and they kept saying ‘Can we run it again, can we run it again?’ I was frightened we were going to wear the film out before we even got to use it in the picture. Anyway, they were so pleased with it they asked me to shoot the rest of the action sequence — the chase that leads up to it — in St Moritz.

“A good friend of mine, Willie Bogner, was a world class skier. He could ski backwards or forwards with a camera slung under his legs and you’d get some fantastic moving shots.

“So I used him — he was brilliant — plus a Swiss cameraman that I’d used on On Her Majesty’s Secret Service, and we produced a fantastic sequence up on the glacier.

“But we got maroooned up there one night and most of the crew had to spend the night on the mountain — they had to build a little snow hut and walk around all night slapping their arms around their chests to keep warm.”

Now 86, John has left his days of snowy adventure behind him, though he remains a keen golfer and has played at Huntercombe Golf Club in Nuffield, where 007 author Ian Fleming was a member for 32 years until his death in 1964.

At the start of the now-famous golf match in Goldfinger, Bond tells his adversary that he played off nine at Huntercombe — a handicap he shared with his creator.

At 33, John’s handicap is a bit higher than that these days. “I’m awful, but I was a bit better than that previously.” That said, he’s still a good sport when it comes to helping others.

On Thursday, June 6, he is giving a talk about his life and career at the Kenton Theatre in aid of the Chiltern Centre for disabled children in Chilterns End Close.

The “evening with” event starts at 7.30pm and will be hosted by Bond girl Jenny Hanley, who
co-starred in On Her Majesty’s Secret Service and used to live in Sonning.

John, whose memoir For My Eyes Only was published in 2001, admits he will be re-reading the book to refresh his memory.

“I’m really glad I wrote it,” he says, “because I never kept a diary and as you get older you forget a lot of things — one film merges into another and places the same. So it’s great to have done it and actually got something in print.”

With Jenny asking the questions and John answering them, there will also be some cinematic visuals to enjoy on the night.

“I won’t run much,” says John, “but I will run a couple of sequences and talk about them and invite the audience to ask about them. The Octopussy opening sequence is what I have in mind, and then after I finish that I’ll probably run The Spy Who Loved Me opening sequence with the Union Jack parachute.”

As the editor of Moonraker, John was responsible for making it appear that a pigeon in St Mark’s Square in Venice had done a double-take when Bond’s gondola transforms into a hovercraft.

“Every director has got a personal thing they put in their films, a little signature, and mine was the pigeon,” he laughs. “If people ask me why I always say it’s because they’re freely available and they’re cheap! Wherever you are in the world you can always get pigeons.”

• Tickets for “An Evening with John Glen” are £20. The event starts at 7.30pm and has a running time of 120 minutes, including an interval. For more information and to book, call the Kenton box office on (01491) 575698 or visit www.kentontheatre.co.uk