Saluting the man who made cricket readable 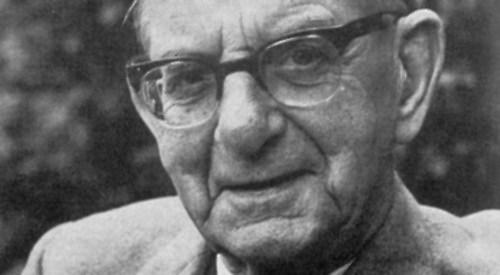 A JOURNALIST who won the William Hill Sports Book of the Year award twice in the space of three years will be paying tribute to one of his most distinguished predecessors at this year’s Henley Literary Festival.

Former Nottingham Evening Post sports reporter Duncan Hamilton made his name as an author with his 2007 memoir Provided You Don’t Kiss Me: 20 Years with Brian Clough.

Two years later, his biography of Nottinghamshire and England fast bowler Harold Larwood — who was at the centre of the infamous “Bodyline” controversy of 1932-33 — met with similar acclaim.

Both titles won the William Hill award and in 2010 another of Hamilton’s books on cricket, A Last English Summer, was shortlisted.

A prolific author, the intervening years have seen Hamilton publish biographies of George Best and Olympic sprinter Eric Liddell and collaborate with England cricketer Jonny Bairstow on his 2017 autobiography A Clear Blue Sky.

Reflecting his wide-ranging interests beyond the football pitch and the cricket ground, he also wrote his first non-sports book, The Unreliable Life of Harry the Valet: The Great Victorian Jewel Thief.

The late 19th century is a period Hamilton revisits in his most recent work — a biography of the cricket writer Neville Cardus.

Born in Rusholme, Manchester, in April 1888, Cardus started life in the humblest of circumstances. His mother and aunt were prostitutes, he never knew his father, and his formal education was negligible.

From such unpromising beginnings, however, Cardus rose to be the cricket correspondent and chief music critic of the Manchester Guardian, holding the two posts simultaneously until 1940.

As Hamilton tells it, Cardus was an almost entirely self-invented man. Over time he gradually changed everything about himself: his speech, his appearance, his clothes, his class, even his baptismal name. He also completely reinvented cricket and music journalism — something that saw him awarded a CBE in 1964 and a knighthood two years later.

In the prologue to his book The Great Romantic: Cricket and the Golden Age of Neville Cardus, Hamilton sums up his subject’s achievement as follows: “He [Cardus] became the first newspaperman to look at a cricket match as a reviewer, wonderfully expressive, rather than as a reporter, sent to mechanically tell you how the scoreboard ticked over. The game’s aesthetics, rather than its statistics, motivated him.”

Now 60, Hamilton says he has been a fan of Cardus since the age of 15, adding: “I’ve always been amazed that if you go through any cricket season you will find people making reference to Cardus in their match reports. And they will make reference to him on radio and TV.

“And yet he’d gone into neglect, in a way, which is bound to happen for someone who was born at the end of the Victorian era and who died in 1975. Even though he was being referenced, I didn’t think he was being read. And my hope was that people would then go back and look at his work.”

As Hamilton recounts in his book, he first encountered Cardus when he was interviewed by John Arlott for a BBC documentary in autumn 1973.

Inspired to start reading him, he hunted down a copy of Cardus on Cricket that was lurking in the basement of Nottinghamshire County Library, just across the road from Trent Bridge.

This in turn prompted Hamilton to start writing a fan letter that he left unfinished when he realised he didn’t know where to post it to.

By the time news of Cardus’s death broke in February 1975, Hamilton had decided he wanted to become a sports reporter and promptly wrote to John Arlott to ask for advice.

A year later he took his first tentative steps into the world of journalism when he started working part-time for a local news agency.

“I was very lucky because there were two very good people who ran the first news agency that I worked for. I arrived there just as Matthew Engel had taken over the sports side, and so I had Matthew as a kind of coach.

“I should have been doing my
A-levels but I spent most of my time at the agency covering cricket or football. Our office was at the back of the cricket ground, by the Radcliffe Road stand. We could half look at the scoreboard, from memory. You could literally walk into Trent Bridge in 90 seconds and you could walk to Nottingham Forest in two minutes and Notts County in five.”

Over at the City Ground, Brian Clough, then partnered by Peter Taylor, had already started to make his mark, having joined Forest in January 1975 — shortly after the end of his disastrous 44-day spell as manager of Leeds United that was later immortalised in David Peace’s 2006 novel The Damned Utd

Hamilton recalls: “What basically happened was that when Matthew Engel left, I took over his job. So I was already covering Forest.

“It was the season Forest won the league title [1977-78]. Then I went to the Nottingham Evening Post. And in 1979 I covered Notts County for a year, which was torturous, really, I have to say.

“But I was still called in to do Forest things. Like I followed them around Europe that year because it always took more than one person to be able to do the amount of copy they wanted.”

Having become league champions immediately after gaining promotion from the second division, Forest went on to win the European Cup two years in a row.

“It was just fantasy, absolute fantasy,” says Hamilton. “I mean, this was a side that was in the old division two in January 1975. So by the time they came to the end of May 1980 they had been champions of Europe twice. Within three years they got promoted, then they won the league title, then they won the European Cup.”

After a few bumps in the road that he writes about in his book, Hamilton had gone on to build a close working relationship with Clough and his players. So much so that he — a non-driver — was eventually invited to travel to away matches on the team coach

“It’s inconceivable now that anybody would every get that close to a Premier League football manager. There are just the organised press conferences and the occasional sit-down when somebody usually wants to plug something or they’re doing it on behalf of sponsors.

“You were so privileged, really, but after a while you just took it for granted in a way. I think I described it at the time when the book came out, for anybody who didn’t know anything about that period, it really was like the TV show Life on Mars — because it was! It was a completely different era.”

Duncan Hamilton will be in conversation with Vic Marks at the town hall at 2pm on Wednesday, October 2. Tickets are £9. For more information and to book, visit www.henleyliteraryfestival.co.uk