Actor-playwright has been through the Mill 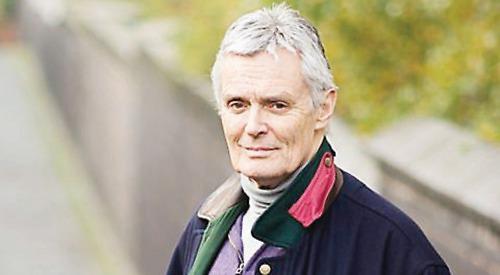 SIMON WILLIAMS lives in a world of make-believe — and he couldn’t be happier about it.

At 70, the veteran actor, who lives in Bix, is busier than ever filming and recording on a range of projects.

On the morning I telephone, he tells me he’s due to head up to Birmingham later that day to “do some Archers”.

As Radio 4 listeners will know, Williams plays the smooth-talking but ruthless Justin Elliott in the long-running soap.

“In the middle of Birmingham, there we are in rural Ambridge,” he says.

Is there anything even remotely rural about the setting?

“Not at all, it’s on the fourth floor of an office block!” he chuckles. “Such is the world of make-believe.”

It’s a world Williams has inhabited for quite some time. He first appeared on television in 1967 — the year the BBC broadcast its first colour pictures from the Wimbledon tennis championships.

His big break came in 1971, when he was cast as James Bellamy in Upstairs, Downstairs — one of the roles for which he is still best known, along with that of Dr Charles Cartwright in the Eighties sitcom Don’t Wait Up and Sir Charles Merrick in Holby City in the early 2000s.

In the late Eighties and early Nineties he embarked on a second career as an author, publishing two novels, Talking Oscars and Kill the Lights, that both featured in the bestseller lists.

Ultimately, however, he realised his true ambitions as a writer lay elsewhere.

“My father was an actor-playwright, by the name of Hugh Williams, and he was always appearing in his own plays. I just always wanted to follow in his footsteps,” says Williams.

“The thing about writing a play and then appearing in it, it’s very, very satisfying because you can tailor-fit it to suit the play to the actors you have — and it’s good to have an audience enthralled, that’s what’s good about it.”

The author of seven stage plays to date, Williams says he owes “a huge debt of gratitude” to Mill at Sonning managing director Sally Hughes for encouraging his development as a playwright.

“All of my plays so far have premiered there,” he says. “Sally Hughes has been my mentor, really — she’s nurtured new plays of mine and she’s put them on.

“She’s been wonderful to me and she’s made me — she’s allowed me to become a writer. I always wanted to be a playwright and she’s encouraged that and made it possible.”

As the titles of his novels hint, Williams’s professional background is one of the threads that runs through his writing.

“They [the novels] were certainly related to my knowledge of the theatre — they were both screened against a theatre background. They were thrillers and they did very well. But then Sally said ‘Why don’t you write a play?’ and I’ve been writing plays ever since.”

The theatrical thread is likewise woven through Williams’s third play, Kiss of Death.

Originally staged at the Mill at Sonning in the spring of 2000, it has been revived by the Brighton-based theatre company Talking Scarlet for a five-night run at the Theatre Royal, Windsor, that starts on Tuesday (February 7).

Actress Zoe Lang attends a most unusual improvisation workshop and finds herself auditioning to be the bait for a real-life serial killer. Taking on the role of a young runaway, Natasha Campion, Zoe meets the sinister and manipulative John Smith. Layer upon layer of twisted unreality is stripped away as Zoe and the police home in on their target...

Williams says of his creation: “I’ve written a couple of thrillers for the stage — Double Death, which Sally put on, and this one. This one is rather less conventional. It’s very eerie and there are some very nasty twists and turns in it. I directed it the first time we did it and there were some really good moments of people jumping out of their seats. I think there was a stifled scream or two.

“Usually with comedies, which I’ve written some of, you get the noise of laughter to show you they’re enjoying it, but with a thriller it’s good to get a gasp or a little scream — that’s very good.”

Owing to his current workload, Williams hasn’t been able to get directly involved in the Windsor production, but he is happy that Kiss of Death is in good hands, having worked with Talking Scarlet on previous stagings of his work.

He said: “I had heard it was going to be later in the year when I was going to be free to maybe be involved, but I am very busy at the moment doing bits and pieces of film and radio so I haven’t had anything to do with it. But I do know Patric Kearns, the producer, who’s also directing it. Obviously we keep in touch and I’m looking forward to going to the first night.”

Talking Scarlet’s plans for Kiss of Death extend beyond the week at Windsor, with Mr Kearns confirming that the company intends to tour it around the UK this summer, including a four-night run at the Haymarket theatre in Basingstoke from May 24 to 27.

He said: “The first play we did of Simon’s was Double Death. We were looking for an accessible thriller for four weeks in Eastbourne and the play fitted the bill perfectly. The director and I met Simon at his club and the rest, as they say, is history. We then did another of Simon’s plays, Nobody’s Perfect, last year, again for Eastbourne, and Simon encouraged me to read Kiss of Death. Of the three it’s my favourite, which is why I’ve decided to direct it myself.”

For his part, Williams is clearly delighted to see his creation being staged at the Theatre Royal.

He said: “It’s a perfect size. Six or seven hundred is perfect for plays. It’s a lovely design and the acoustic is very good. There’s a lot of special effects in this play — sounds of echoing footsteps when people go off and lots of blood-curdling screams and things like that. They will all echo around that wonderful theatre very nicely.”

He’s also pleased by news of the tour, adding: “Kiss of Death has been performed all round the country. I’ve got a great wodge of reviews of it and everyone finds it pretty spooky. There’s one or two very nasty characters in it and nobody’s quite who you think they are — it’s one of those. It’s not a whodunnit, it’s a thriller, and I think there’s a difference. A whodunnit makes you scratch your head but a thriller makes you hold your breath.”

l Kiss of Death is showing at the Theatre Royal, Windsor, from Tuesday (February 7) to Saturday, February 11. Evening performances are at 8pm with matinées at 2.30pm on the Thursday and 4.45pm on the Saturday. To book, call the box office on 01753 853888 or visit www.theatreroyalwindsor.co.uk