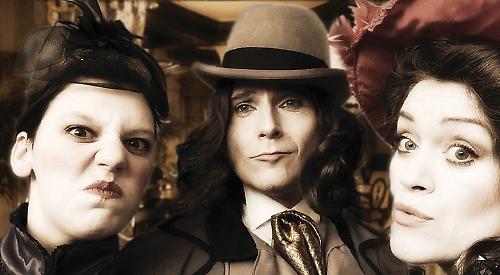 HE was the greatest wit of the Victorian age whose stories, sayings, poems and plays continue to delight us today, but Oscar Wilde’s own story ended in ignominy and tragedy.

Following his release from Reading Gaol in May 1897 he sailed immediately for France, where he was to remain in exile under the assumed name of Sebastian Melmoth, dying three years later at the age of 46.

Often credited with inventing the modern idea of celebrity on his 1882 lecture tour of America, it is natural to wonder what form Wilde’s fame might have taken had he lived in the age of radio, television and the internet.

Perhaps the seriousness underlying his humour would have led him to shun the airwaves, let alone Twitter. But as the man himself famously said, “I can resist everything except temptation.”

One Wilde aficionado who thinks the Irishman would have made a great chat show host is Jonathan Goodwin of the Don’t Go Into The Cellar theatre company.

So much so that he and his colleagues have been touring just such a show around UK venues for the past two years — and are bringing it to the Kenton Theatre on Saturday, February 18.

Jonathan, who both writes and stars in the show, says: “I guess I began thinking, well, if chat shows had existed in the Victorian era, and if TV existed, then Oscar Wilde would have been the natural choice to host it.

“In a way, it’s Graham Norton sent back in time to the 1890s. So lots of Wildean quips, there is storytelling in it — he narrates The Happy Prince and The Nightingale and the Rose — and music as well. We have Marie Lloyd — probably the biggest music hall performer of the day — she’s one of the guests. And also William McGonagall.”

Renowned as one of the worst poets of all time, McGonagall is played by Phil Jennings, with Sali Gresham portraying Marie Lloyd.

Another guest, Cora Crippen, the wife and alleged victim of the notorious Dr Crippen, is played by Amy Bullock.

The choice of Crippen as a guest is a subtle nod to the macabre — something of a specialism of Don’t Go Into The Cellar, whose other touring shows include Murder by Gaslight, Morbid Curiosities, Penny Dreadful, Old Haunts, Frankenstein and Dracula’s Ghost.

Jonathan, who founded the company in 2010, calls Tea with Oscar Wilde “a nice contrast to the usual spooky stuff that we do”, adding: “It’s funny, there are songs in it, it’s light-hearted and it’s a lovely change for me to be able to make people laugh.”

Given Wilde’s acknowledged status as a legendary wit, you’d think his shoes would be rather intimidating ones to have to fill on stage. But Jonathan is unfazed.

“Well, there’s always scope for ad-libbing and improvisations, so although the show is semi-scripted — the script is written for the other actors playing the characters — I always endeavour just to be as familiar with Oscar’s ways and what he said as I can because, honestly, when I’m chatting to members of the audience you never know what they’re going to say, and it could be about anything.

“But it’s just getting into the spirit of the man — you know, it’s light-hearted, it’s funny, and from everything that I’ve read he was a thoroughly likeable man. Very witty and charming. And audiences tend to appreciate that.”

Jonathan says that while his portrayal of Wilde isn’t set at any one point in his career, it does aim to show him at the peak of his powers and his fame.

“When we join him, none of the downfall has happened — the Marquess of Queensberry and the trial that was the ruination of him, that hasn’t happened at all. So he’s just at the top of his game — he’s funny, everyone loves him, he’s famous for being witty, you know, for being a great writer, and it’s just a party round at Oscar’s place — he’s inviting his mates round to tell jokes. So, yes, two hours of good old-fashioned fun.”

As someone who set up his own theatre company, you might have thought Jonathan would have been to drama school. But no. After reading English and media at Plymouth University’s Exmouth campus, he found his way out into the world of work.

“I’m 44 now. Didn’t start acting until 10 years ago. I used to be an arts events manager. So it was all about events management. And then I left that and I thought, ‘Do you know what? I’m going to become an actor.’

“I hadn’t gone to drama school, but I knew... I think with acting you can or you can’t, and I’d always written. And so 10 years ago I began going to auditions, got bits of work.

“But then I found that there weren’t — the kind of jobs that I was going for weren’t really the kind of acting gigs that I wanted, because I wanted there to be theatre based around Victorian themes, and it didn’t exist. So I just thought I’d invent it myself. So in 2010 I set the company up. Began writing the scripts. We’ve got about 30 scripts now that I’ve done, and we always tour constantly 10 or a dozen of them.

“Because I know very much the kind of thing that I’d want to watch, I think that was half the battle. And because I’d always read this kind of thing, it’s just imagining that type of thing but transposed to the stage and given a fresh imagining. Just a case of, you know, picturing what I would like to see and then writing it. It’s pretty much that straightforward.”